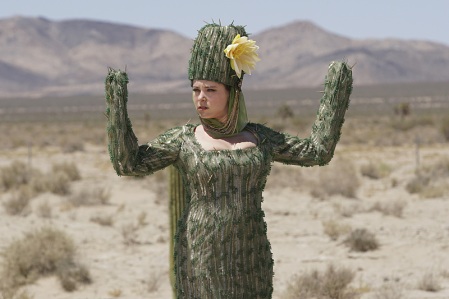 Rebecca’s peddling as fast as she can to avoid taking a good look at herself. She doesn’t have Josh, Greg, or Paula to keep her relatively sane any more. She has her new girl group, but neither Val, nor Heather are likely to go as far down the obsession path with her as the other three did. Val shares her obsession with Josh, but has too much self-respect to take the stalking too far, I think. We’ll see. Even if she does, I doubt it will affect the other parts of her life.

Rebecca was seeing “signs” everywhere, right from the pilot on, and Paula encouraged it. It was literally a giant sign pointing to Josh that told her to move to West Covina. That makes the negation of the signs that much more meaningful. Greg was the anti-Josh when he refused to give the “danger” sign credit for his decision to leave instead of staying in West Covina with Rebecca. He took responsibility for the decision, and told her that straight out. The acknowledgement of Josh’s love kernels was also a step in the right direction for Rebecca, but she still had to ask Greg if he loved her. She’s still too caught up in seeing what she wants to see in people, rather than seeing what’s actually there. She’s been forced to face that Josh never really loved her, and the results have been difficult for everyone, and will probably continue to be.

When we first saw West Covina, in the first iteration of the song in the pilot, it looked like a typical small southwestern town: graffiti, some boarded up buildings, a little run down and rough around the edges. Economy not necessarily doing great. Then it became bright-colored and idealized from the point of Paula and Bex duet of West Covina at end of pilot on, until the last couple of episodes, when the reality began to show through again. Lately, the plaster is peeling off the walls, there are drug dealers and murderers, and help doesn’t always come when you need it. Rebecca is starting to feel the truth of her own situation there. Josh isn’t as perfect as she thought he was either, and a perfect relationship with him isn’t possible.

Paula also isn’t who she claimed to be in the pilot, the friend who would be there for Rebecca no matter what, to help her win her Prince Charming. In the pilot, just as Rebecca was realizing that maybe it was crazy to follow Josh back to West Covina, Paula swooped in and convinced her, NO, REBECCA, YOU’RE NOT CRAZY. Now, Paula’s trying to undo all of that damage from season 1, and convince Rebecca that maybe it is crazy after all to build her identity around these two guys, or her girl group, or whatever crazy scheme she’s up to this week. Paula led Rebecca through the obsession with Josh and ensuing shenanigans, maybe she can lead her through the recovery as well.

Wow, they’re throwing out massive hints that something went terribly wrong in Paula’s past. She recognizes the signs of alcoholism immediately. She ran away from her wedding (then came back). She’s had dreams end in disgrace. She has difficulty believing her dreams can come true at all. Hang on hard to law school, Paula! Don’t let this one go!

I still miss Greg. Sorry, Paula, your own issues were blinding you when it came to Greg. Sure, he and Rebecca both have their own issues to work on, but if they can get to a healthier place in a season or two, they are the ones who belong together. He’s her equal and her match in ways Josh never will be. Paula saw Josh as the fun fantasy boy she wanted instead of the practical, boring husband she had at home. It’s going to take a lot to convince me that Greg and Rebecca aren’t meant to be together in the long run. He’s left such a huge hole in everyone’s lives, and he’s so devoted to his friends and family. He’ll end up missing them and coming home after he realizes he’s not a big city boy. He’ll be back, wait and see. 🙂

Rebecca and Greg’s relationship would have gone differently had Paula not been around to constantly steer Rebecca back toward Josh and bad mouth Greg. Not sure it would have gone better, but it would have been different. Both of them need to hit bottom (Greg already has) and get help before they can handle a healthy relationship, and Greg needs to get out in the world and do the things he missed by staying in West Covina to take care of his dad. Had they gone straight into a serious relationship in S1, it would have ended disastrously with them probably hating each other, so in the long run Paula might have done them a favor.

They Were a Shit Show, but they were our shit show. 😢 😢

WHERE IS FATHER BRAH???

Joshie is lost. He started the season homeless, sleeping on bubble wrap in the store’s backroom so that he could avoid Rebecca and his Catholic guilt. He’s progressed through reorganizing every bit of stock and office supplies he could find in the place, to hiding in a packing box covered with packing peanuts. And he’s ashamed he’s living with his mom again. Sure, he felt great for a minute when he got sent to faux burning man to fix the sound system. That was familiar, something he’s good at, and he could be a hero. He met Anna there. But now he’s back in the real world with no Valencia, Greg, or Rebecca to run interference for him when his anxiety gets to be too much, and a cool new girlfriend to keep up with and impress. I can’t wait to see what he builds in the store’s backroom next. But could Father Brah please come help the kid out? He’s rapidly turning into the crazy, needy boyfriend. Why has Josh only talked to Father Brah once all season, when he’s lost every other calm, supportive person he can usually count on?

WhiJo and Daryl seem to be in great shape, but something still feels shallow about their relationship to me. Maybe it’s just the fact that they needed Rebecca of all people to give them relationship advice. They just seem too perfect, and WhiJo is so judgy of everyone else. Or, maybe I’m just catty and cynical.

Sunil is adorable. The actor is charming and funny. The character is obviously very needy, and recognizes Paula as a mothering type who’d be good for his situation, but I don’t like the way he immediately tried to insert himself between Rebecca and Paula. By all means, let’s bring him into the fold. I get the sense he’d love doing girl group stuff, but stop with the getting involved in Rebecca and Paula’s arguments.

We’ve gotten to know so many more of the background characters better this season. Characters like Maya, Karen, Hector, Trevor, Heather, and Scott, and new characters like Anna. The layers of these characters are being revealed just as we’re finally seeing the truth of West Covina itself. Filling in these details with hilarious bits is one of the things this show does best.

I don’t quite understand the reasoning that had CrazyExGF following The Vampire Diaries. Every week when I turn on the TV to watch my neurotic romantic comedy, someone is lying on the ground in the dark with blood pouring out of their mouth (usually Damon, or someone Damon’s attacked). I suspect they figured both shows were romantic shows, so TVD watchers would stick around, but tonally the shows are completely different. It’s jarring to go from one to the other. Even worse than going from The Flash to No Tomorrow. No Tomorrow and Crazy ExGF would have been great together. Either would work with Jane the Virgin (CrazyExGF already did), or probably with Supergirl. Maybe even Legends of Tomorrow, since it’s a light, comedic show. But The Vampire Diaries is too dark to fit with the brighter, light-hearted comedies, even though they do have a dark edge to them. Please don’t make us do that again next season. And, please give us a next season.