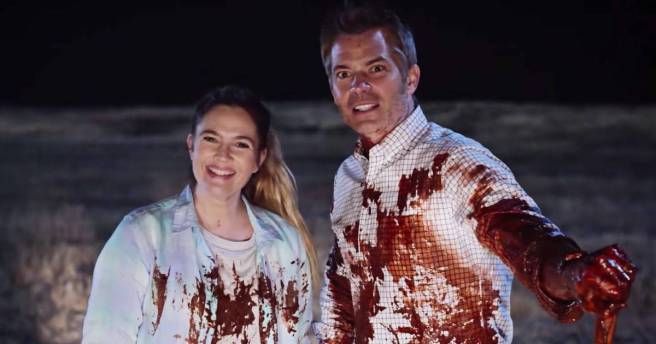 Joel and Sheila have driven out into the desert to dispose of Gary’s remains. Sheila’s gossiping about friends who might sell their house. She’s excited about the listing. Joel seems a bit tense. They have a Rubbermaid bin full of Gary, but Sheila couldn’t find the lid. They have an argument about the lost lid that has been had by every single cohabitating couple since the invention of Tupperware. They might be the first ones to have it over a container holding the body parts of a coworker. Let’s hope so, for our peace of mind.

Another car appears in the desert. They rush to push Gary toward the hole they’ve been digging, but without a lid, he slops over the sides and ends up all over the place. Joel and Sheila prove how strong their marriage is by putting aside the argument and shoving the Gary mush toward the hole together. The other car pulls right up in front of them. By now, they’re covered in blood, holding shovels, and surrounded by a bloody mess on the ground. Joel suggests they act casual. They should pretend to be helpful Mormons who’ve stopped to clean up a murder site. Mormons do have a reputation for being helpful during crises. It could happen.

Abby and Eric get out of the car. Abby got worried, so they used a phone tracker app to follow her parents. Sheila can’t lie to Abby. She confesses to eating Gary and offers to leave the family since she’s become a monster. Hey now, I thought we weren’t going to use negative words like that.

Joel and Abby tell Sheila they don’t want her to leave, while Eric starts filling in the hole, because he is a science genius and criminal mastermind. He points out that they should clean up the crime scene and get out of there quickly, then make it look like Gary left town. Since Gary is new in town and has no family, no one will care. Like I said, criminal mastermind.

While Joel and Sheila are getting rid of Gary’s car, they have a serious discussion about what happened between Sheila and Gary and how to handle their new reality. Joel wants Sheila to meet him halfway by returning the Range Rover and only eating chicken or beef. Sheila says that she didn’t have sex with Gary, though she did eat one of his balls.

They spray a chemical solution over Gary’s blood on the lawn to mask it. Dan, the LA Sheriff’s Deputy who lives next door, notices them spraying in the middle of the night.

The next morning, their boss, Carl, can’t find Gary, so they get the listing on the Peterson house back. Joel decides to visit a virologist at City College. And Sheila has discovered that California law says all new car sales are final, so they have to keep the Range Rover. The California law is apparently real, so make sure you want that car before you buy it.

Abby interrupts to tell them that Dan is in the backyard snooping around where Gary died/Joel sprayed. Joel tells Dan that he’s spraying for ants. He turns his hands into claws and makes a growling, hissing noise, so I’m going with fire ants as the pretend infestation. Sheila tells Dan it’s none of his f*cking business, which is the appropriate response. He’s their neighbor, not a cop investigating a crime scene. He has no warrant and no right to be on their property asking questions. Joel tries to laugh the whole thing off, but does tell Dan that it’s not cool for him to just wander into their backyard whenever he pleases. Dan tells Joel to stay on top of his ant problem, and manages to make it sound threatening. I knew I didn’t like that guy. Neighbors do tend to hate it when your fire ants wander into their yards, though.

Joel goes to see the virologist, and it’s Patton Oswalt! Is he another Koenig brother in hiding? It doesn’t seem like it. His name is Dr. Hasmedi, and he’s not very open-minded for a virologist. He calls in a psychiatrist to deal with what he thinks are Joel’s delusions. Joel leaves quickly, which works out fine, because it’s time to show the Peterson house.

Sheila tries eating breakfast but chicken and beef repulse her since she’s had Gary. She has to go hungry for now. The house showing turns into an odd sales pitch/pseudo argument between Sheila and Joel, until they hear a rooster. Sheila goes to see if fresh chicken will taste better than packaged chicken. It doesn’t.

Abby and Eric ditch school and go to a comic book store. The guy who runs the store is hostile and eventually gets right up in Abby’s face, just as she’s reading a very upsetting Mombie comic book. Abby snaps and gets aggressive right back. He backs down, and Abby decides maybe she likes the store, and her newfound feeling of power.

Sheila and Joel get the offer on the house. Happy dance! But, it’s a short dance, because Sheila still needs to eat. It’s time to explore human options.

They try the morgue. The morgue attendant assumes they want a body for sex, like it’s a regular occurrence. Wonder how lucrative his side business is? $500 gets them a foot. Sheila gamely takes a bite, but it’s old and full of chemicals. Anyone can see that it’s not edible any more. Joel is momentarily upset about wasting the money. It’s the most expensive meal he’s ever bought her, and she won’t eat it.

Back home in bed, Sheila wonders how this happened to her. Joel apologizes for yelling over the foot. He tells her that he’ll help kill people so that she can eat them. They’ve been a team since high school, he’s not going to bail on her now.

-Kelly has a detached bonus room. I am very jealous.

-Joel clings to their ordinariness by repeating over and over that they are REALTORS. Sheila and Abby talk about returning to normal life, but they’ve both already made significant changes in their behavior. They all expressed a longing for something more in the breakfast scene of the pilot. They just didn’t expect that this is the way that they’d get it.

-Hopefully Sheila can handle eating frozen and thawed human so that they can spread out the murders.

Eric: “Please don’t tell Dad. He loves his car. Keeps it covered with a blanket in the garage, which is how I’ll end up if he finds out I took it.”

Eric: “But you only ate some of him? The undead equivalent of over ordering.”

Eric: “The less time spent at a crime scene the better. My stepdad is a cop and I enjoy the internet. And the first thing about crime is you don’t want to get caught.”       [You would think this would be obvious, but it’s not, in real life and on TV.]

We are played out of the episode with Cage the Elephant’s Trouble: