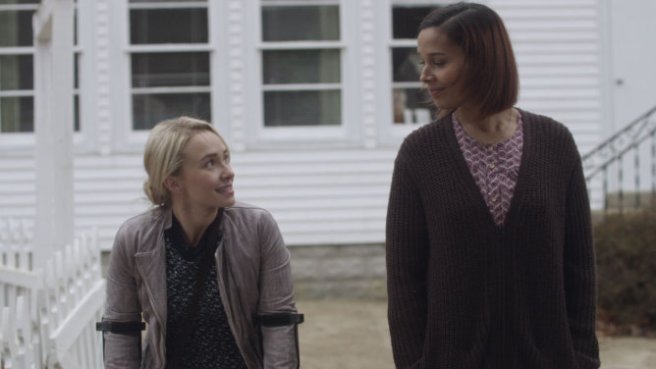 This is a meta post following Nashville episode 5×08 Stand Beside Me. Spoilers ahead, including for future episodes.

The rumors have been swirling for months that Connie Britton would be leaving Nashville midseason this year, roughly around episode 10. They began last summer, but then Connie seemed to put the rumors to rest by going on Ellen DeGeneres’ show in early January and saying that she was on Nashville for the “duration”. The duration of what, she didn’t specify. The video of Connie’s appearance on Ellen is at the bottom of the post.

There is a very good chance that Rayna is going to die from this car accident or be written off the show in some other way, when they’re done with faking the audience out. Connie Britton is undoubtedly expensive, and the show’s budget undoubtedly needed to be cut when it moved from ABC, a Big 3 network, to CMT, a tiny cable network. Chip Eston isn’t as big of a star, so they can afford to keep him for a while more as Daphne and Maddie’s parent, and Scarlett’s uncle.

Rayna and Deacon are the last two cast members who are over 40 remaining on Nashville. Other than an occasional, fleeting siting of Bucky, everyone else has been killed or written off who was either older, or seemed more middle-aged. The replacement cast are all under 40, and look and act young. Nashville is aiming for a younger skewing audience and will have only a few minor/recurring characters who are older to guide the younger characters occasionally. Zach is already in place to take over the business side of Highway 65. Juliette said that Rayna’s not the only one with an eye for talent. She’s ready to move to the production side of music for a while and let Avery be the performer. Deacon is also very good at that side of the business, and will want to keep the label going, since it was Rayna’s vision. That might save his character for a while, at least until Maddie and Daphne are old enough for Maddie to become Daphne’s guardian, or for Daphne to be sent to boarding school, so that Deacon can be written out as well.

The change toward an exclusively younger cast seems like a mistake to me. One of the things Nashville always had going for it was the sweeping nature of the stories, with plots taking place across generations and socioeconomic and racial dividing lines involving characters who were larger than life. (Remember S1, when Rayna had an entire extended family, and her elderly mentor, Watty White?) Drawing the cast back into a tight circle of people who are all within 20 years of each other in age puts a limit on the life experiences that the writers and the cast have to work with. Getting rid of virtually everyone who wasn’t a professional musician has already limited the storylines drastically compared to the first two seasons of the show. But that sounds a lot like the show that the new showrunners, Edward Zwick and Marshall Herskovitz, are most famous for: thirtysomething, which was an ensemble show about six white, upper middle class baby boomers coming to terms with adult responsibilities. It focused mainly on the angst they experienced in their personal lives. Are we headed for nashvillesomething, starring Maddie, Clay, Scarlett, Damien or Gunnar, Juliette, and Avery?

As of 5×08, we haven’t seen Will in two weeks, and he’s not dating anyone, so it’s hard to tell what direction they plan to go in with his character. Zach has shown a bit of interest in Will, but most of Will’s screen time this season so far has been spent building up to his break up with Kevin. Then his story came to a screeching halt. What’s up with that?

This season Nashville also added a recurring trans character, Juliette’s physical therapist, Allyson, which made it seem like they were going to expand their LGBTQ storylines. She’s also disappeared since Juliette started using crutches a couple of episodes ago. Hopefully Will and Allyson will  be back soon, with storylines of their own.

On the other hand, it’s fantastic that they’re bringing the African-American community back into the show. Hallie, Clay and the other church members deserve to stay for a long time, get families and become deeply developed regular characters. That’s an important factor that’s been missing from Nashville for a long time now. I want to hear their stories and music. Clay has already spoken about how important his grandfather is to him. That’s a great opportunity for Nashville to bring in a recurring character that’s not between 18 and 40 years old, or a professional in the music business, to add some depth to the cast.

Of course, Rayna may survive for many more seasons as the matriarch of the show, as a regular or as a recurring character. 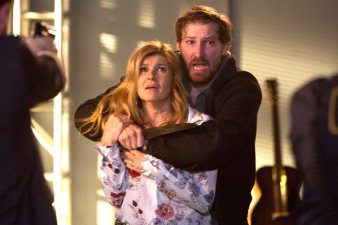 Rayna could also survive her car accident, but spend a long time in a coma, or in a nursing home recovering from brain damage, or leave town because she can’t cope with the amnesia she acquired after the head trauma she suffered in the accident. Any of those scenarios would allow Connie Britton to return for guest spots or longer arcs. But Connie Britton is available for pilot season this spring, so Rayna’s odds for remaining a regular aren’t looking great right now. She’s alive in 5×09, which could put her tearful death scene right where it’s been rumored to be all along- episode 10.

2 thoughts on “The Future of Nashville: Will Rayna Survive and What Does That Mean Going Forward?”