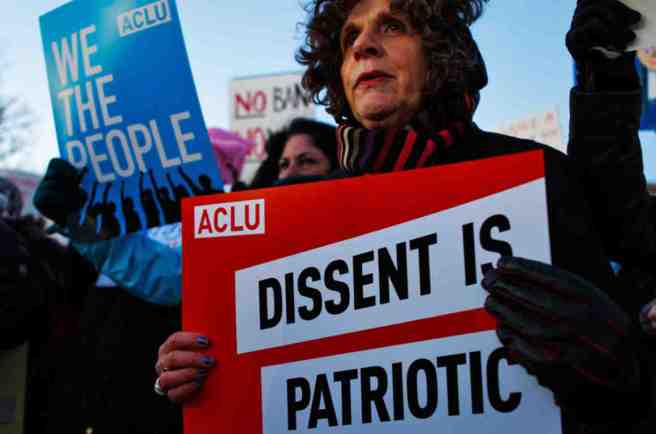 On March 11, the ACLU is holding a Resistance Training. This event will launch People Power, the ACLU’s new effort to engage grassroots volunteers across the country and take the fight against Donald Trump’s policies not just into the courts, but into the streets. We’re organizing grassroots events in communities across the country to watch the livestream together. Please join us!

Under the cut, a message from ACLU National Political Director Faiz Shakir, explaining more about PeoplePower.org and the livestream Resistance Training on March 11, 2017 at 5:00 PM ET.

Reprinted from the ACLU.

By Faiz Shakir, National Political Director, ACLU  FEBRUARY 24, 2017
In the weeks following President Donald Trump’s inauguration, we have seen the harms that his policies cause people around the world and the danger his actions represent for our civil liberties. Trump’s use of executive power has prompted the protest and defiance of millions, echoing the voices of many who know that our basic American values are being tested by our president.

The ACLU will continue to defend our basic freedoms and hold this administration accountable for every unlawful or unconstitutional measure they propose. We will use the courts as one avenue to aggressively advance our agenda, but we cannot do it alone.

That is why the ACLU is launching a major new grassroots mobilization platform, PeoplePower.org, in response to the growing number of people who believe that Trump’s actions cannot go unchallenged.

We’ve hired a group of digital organizers who have worked with activist groups, the White House, and Bernie Sanders’ presidential campaign to help build and launch PeoplePower.org. With this platform, we hope to help organize the mass resistance to President Trump’s bankrupt policies. With a nationwide presence through our 50-plus state affiliates, the ACLU is well-positioned to take on the incredible responsibility of grassroots organizing coast to coast. This type of program is new for us at ACLU, but it is necessary if we are going to overcome the Trump administration’s attempts to curtail civil rights and eventually advance a 21st century civil liberties agenda.

On March 11, the ACLU will hold a “Resistance Training” town hall in Miami, Florida. An email ask went out today to the organization’s over 2.5 million members to organize thousands of grassroots events in communities across the country to watch the ACLU town hall. Full details on the training are forthcoming.

PeoplePower.org will use digital tools to communicate with and help train volunteers to resist President Trump’s unlawful policies across the country. The ACLU will promote ideas for action to defend sanctuary cities, resist deportation raids, oppose the Muslim Ban, maintain Planned Parenthood funding, and support other priorities. But the program will also seek to amplify organic, bottom-up grassroots actions. PeoplePower.org will be a one-stop hub for everyone looking to influence the national debate.

We ask you to join us as we build communities ready to resist Trump’s agenda and to protect our constitutional rights. The fight may not be easy, but it will be worth it.

One thought on “The ACLU’s Next Endeavor: Organizing the People’s Power to Resist”