Okay, so, wow. That was bad. So bad that I can’t bring myself to sit through it a second time to recap it. Who decided that it was a good idea to cancel Agent Carter and green light this instead? They should be fired immediately.

This wasn’t even in the “so bad it’s campy, cheesy fun” category, which is a category I love. This was just stupid, cheap, badly written, badly acted, badly directed, and out of sync with the rest of the MCU.

I didn’t think Iron Fist was all that bad, but Scott Buck has proven his lack of talent with this one. Iron Fist was saved by the requirement to fit in with the rest of the Netflix MCU, and its highly talented cast. He didn’t have those gifts here.

Let’s start with some continuity and logic errors. Just what happened to the terrigenesis husks, anyway? And why isn’t Maximus dead if he’s a human who went through the terrigenesis process? Could we have had a quick explanation as to why that differs from Earth’s process? They’ve spent 3 seasons establishing those facts on Agents of SHIELD.

If Lockjaw the giant teleporting dog 🤦🏻‍♀️ can transport people to very specific places within the castle, why did he drop the royal family all over the Oahu countryside instead of clustered together? And why not grab Maximus and put him in a cell, instead? Or on a different remote island?

Which characters were supposed to be the villains, and which were the good guys? I assume we’re supposed to be on Black Bolt and Medusa’s side, the hereditary rulers who care more about tradition, sex and their hair than the people who are dying in the mines. Personally, I found Maximus and his cause more sympathetic, even though he’s ruthless. Other than Maximus, the aristocracy seemed to be out of touch with the people, and weren’t listening to complaints about how the populace who lived outside of the castle were being treated. Maximus, being part of the inferior class himself, as well as a prince, seemed sincere in wanting to help them. Even if he was just manipulating people for power, he found a weakness to exploit that the ruling family left open.

Then there’s the constant stupid decisions made by the royal family. Black Bolt stands in the middle of traffic like an idiot. Karnak practically throws himself off of a cliff. Gorgon stands on the shore of the ocean calling for his lost cousin, like Triton will hear him from deep underwater, then swims underwater until he almost drowns. It’s just lucky that the friendly gang of surfer dudes appeared out of nowhere to save him when they did. 🤦🏻‍♀️🤦🏻‍♀️

We can’t forget the queen and the princess, who both feel that the evil mastermind will change his evil plan once he realizes that Medusa and Crystal will be furious with him if he goes through with it. To be fair, he does seem to be in the market for one of the sisters to be his consort, but only on his terms. Medusa definitely overestimated her own influence, intelligence, power, and beauty.

And now she’s devastated by having a crewcut. Not, as far as I could tell, from the loss of her minimally effective hair powers, but simply from the loss of identity brought on by the drastic change in her looks. She spends most of her time looking mopey and rubbing her scalp. The rest of her time is spent declaring herself queen and losing fights, or not finishing them properly. She’s an old cartoon character, like a Power Puff Girl or a My Little Pony.

I think her hair was terminally ill anyway, and Maximus probably shaved it off as a mercy killing, in the most inadvertently funny scene of the night. Besides, if her inhuman power is her long, thick, luxurious, sentient hair, shouldn’t it grow back at an accelerated rate? Does she stimulate hair growth by staring at herself in a mirror for hours on end and making grandiose statements to her husband and brother-in-law?

Crystal doesn’t seem to be bright enough to have any thoughts at all. I’d call it sexist, but Karnak and Gorgon are just as brainless. Maximus showed the patience of a saint by waiting this long to overthrow these leeching, useless royals. 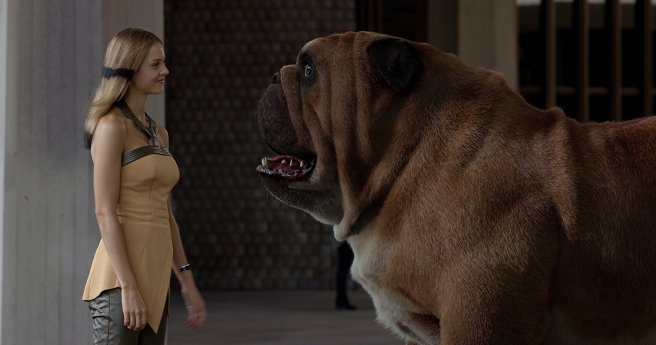 And, how badly done were the Medusa hair effects? Why does everything look so cheap??? The effects budget for this show looked like it was about $1.50. This is the MCU and ABC is a major network. Given the hackneyed dialogue, it’s clear that the budget wasn’t put toward the writing staff, either. Those endlessly gray moon sets were surely recycled from some other drab, failed scifi show. The inhumans used their powers so little that I’m still not completely sure what some of them are, 25% of the way through the season.

There must be some good things I can say about this show… The cast is diverse. Black Bolt has a very square jaw and an easygoing manner with a twinkle in his eye. He’s in on this joke of a show. The Hawaiian scenery is gorgeous. Any little hints of continuity with the rest of the MCU are always fun Easter eggs, and there are some in these episodes. The plot is a typical comic book plot, with an unusual twist thrown in here and there.

I’ll probably keep watching for now, to see if Marvel’s Inhumans improves after another episode or two, but that’s hard to imagine right now. The characters and dialogue are hokey. The writing seems confused as to who these characters are and where their stories are going. The characters’ powers are confusing and inconsistently used. Other than the natural beauty of Hawaii, the design elements feel cheap and tacky, like something stuck in the last century.

If we’re going with a look from the 20th Century, let’s bring back Agent Carter, please. 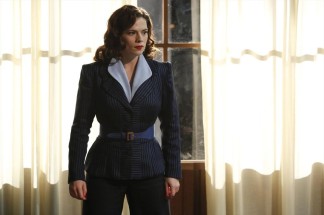 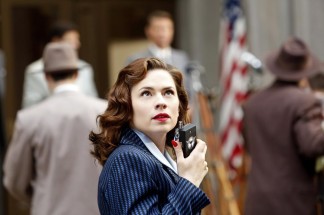