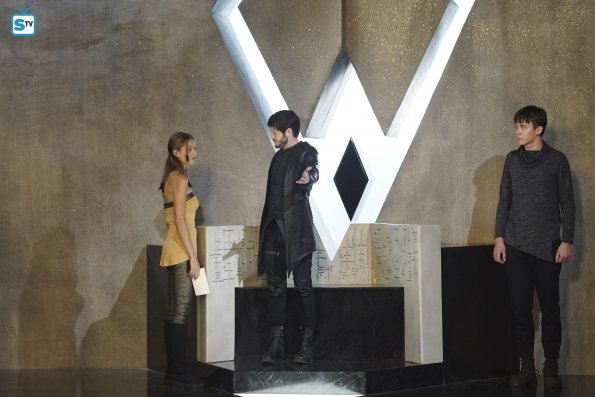 It’s Friday night again, which means it’s time to watch what should have been season 3 of Agent Carter, and is, instead, Marvel’s Inhuman gag reel. Let’s see what kind of fun the gang has in store for us tonight!

Look, it’s Henry Ian Cusack! And he’s using his Scottish accent! He’s some kind of doctor who researches inhumans, and he’s just found out about Black Bolt. I don’t care what he does to Black Bolt, as long as he keeps talking Scottish to me until Red Jamie gets here on Sunday night.

Dr Evan Declan asks native Hawaiian and prisoner Sammy to do him a favor while Sammy’s hanging out in prison with Black Bolt. As it turns out, Sammy’s an inhuman, too, who helps Black Bolt escape. They both hop on the helicopter that Declan just happens to bring round the prison at the exact right moment.

Louise, who normally works for NASA on space missions, has given all of that up to live out of her car and chase the hunch that there are inhumans from the moon in Hawaii. Sure, she’s right this time, but what were the odds? She loiters outside of the police station and county jail for hours, maybe days, hoping to figure out more about the mysterious inhumans.

Medusa continues to wander aimlessly around the city, moping about her hair and telling ATMs that she’s the queen of Attilan. They are American ATMs, so they don’t listen to her monarchist BS, and she has to resort to stealing from the peasants. She wanders into a residential neighborhood and sneaks through the security gate of a mansion that’s otherwise drastically lacking in security. Thankfully, the lady of the house has the exact same measurements as Medusa, so she’s able to get some suitably tight clothing to wear for the rest of her stay on Earth, along with the rest of the supplies she’s been lacking, and a taxi to take her directly to Black Bolt.

Finally, things are magically falling into place for Medusa, the way she thinks they should for a queen of her stature. She doesn’t even have to pay for the cab.

Maximus is busy trying to solidify his power and finish off the royal family, as usual. He has another heart to heart with Crystal, where he tries to convince her to endorse him in front of the Genetic Council. She appears to go along with it after token resistance, but then double crosses him when it’s time to make the speech. Crystal uses her ice powers to disable some guards, throw the throne room into chaos, and go find her giant teleporting dog, Lockjaw. Maximus has Lockjaw sedated, so Dorothy uses some of her snow to wake him up long enough to transport them down to Hawaii. Unfortunately, as soon as they get there, Lockjaw passes out again and is hit by a joyriding kid on a three wheeler. How many reasons will Scott Buck be able to find to keep this poor dog out of commission so they don’t have to pay for much CGI? It’s a total cop out, and they seem to think we won’t notice what they’re doing. Nope, this doesn’t smack of plot contrivance AT ALL. 🤦🏻‍♀️

What are the odds that the kid on the three wheeler will help Crystal and become her Earth boyfriend? Pretty good I’d say. This show never met a cliché it didn’t like.

Maximus sends Auron reinforcements for her work in rounding up and killing the royal family, including Mortis,* a mysterious inhuman with the costume and sense of humor of Deadpool, and the power of Cyclops. Or, at least that was my interpretation of the powers. Who knows with this show.

Gorgon is still with his Hawaiian surfer friends, who have moved into the jungle and weaponed up. They are, conveniently, ex-soldiers who are just itching for another fight, especially one that has nothing to do with them. Gorgon informs them that they’ll be worthless children next to the massively superior inhumans who are coming for him, but the surfers aren’t insulted. It just makes them want to fight more. They don’t ask what the inhumans’ powers might be, so that they can strategize about how to best fight them, and Gorgon doesn’t offer to tell them. Instead, they just hide in the trees and start shooting at anyone who moves, serial killer style, until so many of them have been seriously wounded that they have to retreat. Gorgon isn’t impressing me as a military leader. Clearly Auron deserves his position as much as Maximus deserves to be king.

In the most unintentionally hilarious subplot of all, Karnak wanders into an illegal weed growing operation, and is quickly taken hostage. The growers argue about what to do with him, and the female grower complains to Karnak that he isn’t being open and vulnerable enough with her. While he’s her hostage and tied up to a pole. Kinky. Karnak complies, and reveals some of his emotional secrets, so I guess we know who his new love interest is. It also seems that he has a concussion, which is throwing his power out of whack. He should be able to see the flaws in things and exploit them. Since he can’t, he feels he’s worthless to the royal family, and decides to settle down and become a weed grower too. Maybe he’s found his Nirvana. The farmers decide not to vote him off the island, so it’s Green Acres all the way for Karnak.

Medusa arrives at the prison, hops out of her cab, beats up the guard at the entrance booth, steals his gun, and watches Black Bolt fly away. He’s already napping after his long day or something, because he doesn’t look out the window and see his wife running after the helicopter. Louise the NASA scientist turned stalker sees Medusa and asks her what’s up. Medusa puts her new gun in Louise’s face and tells her to follow the helicopter in the car. I guess pointing the gun is the new version of “I am the Queen!” Look at Medusa, already turning into a typical American.

Interspersed throughout the story are flashbacks surrounding the time when Black Bolt and Maximus went through terrigenesis. Black Bolt never wanted to be king, and Maximus always wanted the job. That explains a lot, though I think we’re supposed to find Black Bolt noble and humble, and Maximus greedy and disloyal. If the guy isn’t interested in the hereditary job which involves being responsible for the lives of 1400 people, it’s better to give him a pass, and let the kid who’s already quoting statistics about the country have a go, even if he’s not your first, biased, choice. Do the producers even understand that Maximus wasn’t eligible to rule Attilan simply because of racism? Or that getting rid of caste systems is what the last 250 years of global human history have been about?

This ended up being a recap despite my best intentions. Oops.

The royal family continues to act like they suffer from some form of brain damage, other than Black Bolt, who’s enjoying being free at last. At least Karnak seems to realize that he has the maturity and decision making capabilities of a child. And a concussion that disabled his powers. Medusa and Gorgon have no excuse, and Gorgon is drawing in others who could end up dead.

Sammy mentioned waking up in a terrigenesis husk, and Black Bolt perked up like he knew about them. Maximus apparently started out with the inhuman gene, and reverted back to human during his terrigenesis, something Hive seemed to think was impossible on Agents of SHIELD. I wish these inhumans were scientifically minded instead of having the intelligence and maturity level of five year olds. It’ll probably be up to Declan, the inhuman researcher, to answer my questions.

The writing for this episode was worse than the last two, if anything. There wasn’t much forward movement for the 3rd episode of an 8 episode season. Most of it repeated what we saw last week, or was predictable. Karnak and Louise, in particular, seem like pointless, time-wasting characters. Hopefully they’ll prove me wrong, eventually. Maybe the weed farm will become the new Attilan on Earth, and they’ll survive on the drug money. Louise can be Matt Damon, and retrain herself as a botanist. They’re used to surviving off of less than moral labor already, so why not?

Actually, I really like that idea. Maximus would be sooo jealous of Black Bolt and Medusa, lying around in the jungle getting stoned all the time, going out surfing whenever they felt like it, having their illegal drug empire’s distribution network run by Gorgon’s friendly looking surfer dudes with scary looking automatic rifles.

Maximus will probably set up his own illegal drug empire on a neighboring island and run them out of business within a couple of years. You know he’s always dreamed of making the rest of the royal family his slaves. I want a perpetually stoned Lockjaw accidentally teleporting all over the world, and the mysterious sightings that result from it becoming an urban legend. Once again, the fan fiction writes itself, and will be way better than this show. Anything that wakes Lockjaw up would be better than this.

The effects and use of powers were almost non-existent this week. Lockjaw had about a minute of screen time and slept through most of it. What we saw could have been looped from some of last week’s footage. Most of the others didn’t use powers, except Karnak and Crystal, who each used a light effect for a few moments. Sammy also melted a garage door with a glowing red light that was underwhelming. It’s like they’re required to put in a few to earn the inhumans name, but are doing the bare minimum required to qualify.

So, to summarize, in a show about powerful inhumans who live on the moon, away from human interference that would have stopped them from developing to their fullest potential, Crystal, the youngest and most undeveloped inhuman, is currently only regular/recurring character who is using her powers and brain much, and it’s a low, low bar, trust me. Auron and Gorgon also still have the use of their powers, but chose to fight hand to hand instead. Everyone else with powers is disabled in some way. 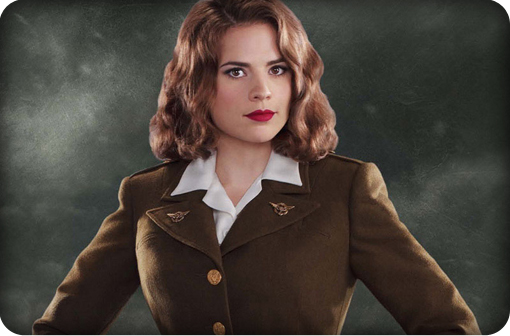 Peggy is appalled by this travesty in what should have been her time slot.

*I assumed Mortis is a variation on the X-men character, but I guess the new character is potentially even more mysterious:

The scene sees Black Bolt’s brother enlist Bronaja to see what’s on the other side of an ominous-looking door. While we’re not treated to the revelation of who — or what — it is, and Maximus’ utterance of “Mortis” or “Mordus” doesn’t sync with any known Inhumans from Marvel Comics lore (Mortis is an X-Men villain, so her rights presumably lie with Fox), it’s obvious that whatever he’s about to unleash is something he may regret.   –Inhumans: Maximus Frees a Dangerous Ally in New Sneak Peek, by Adam Fitch, CBR.com