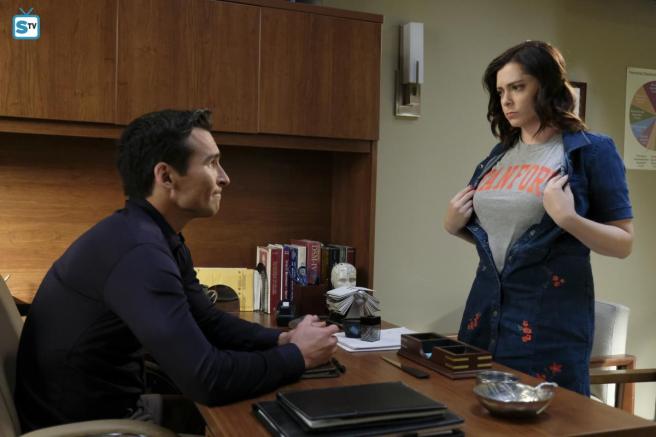 This week, the women of Crazy Ex-Girlfriend are all about keeping the men happy. Rebecca is trying to make up for Nathaniel’s sad childhood and to prove that she’s still an A+ therapy student. Paula takes on Darryl’s babymaking decisions, because these things are just too complicated for a single dad to figure out on his own. Lourdes is kicking Josh out of her house, but she’s also making him grow up and stop being so lame. The mixed message here is that it’s the job of strong, independent, modern women to take care of men’s emotional and caretaking needs, at every stage of life, whether the men think they want it or not. Even if the men resent it at first, they’ll thank you for it later. Since empowering women through enforcing gender stereotypes doesn’t do it for me, this was another disappointing episode.

Lourdes is just about perfect in my opinion, so I don’t have much to complain about there. She’s starting up a home daycare business, and needs Josh’s bedroom for the toddlers. She has a muralist coming on Monday to paint dolphins on the walls, so Josh needs to clean out his closet and move in with Hector and his mom by Monday. Josh gets off to a slow start, fondling every memento and getting lost in memories. When he gets to his old Karaoke machine, it’s all over. He stays up all night singing every song.

Lourdes gives her son some firm, not quite tough, love, and tells him it’s time to grow up. He tries every adorable face in his repertoire on her, from sad and pouty to twinkly smile, and she doesn’t waver. She gives him a generous deadline and refuses to listen to excuses. In the end, he realizes that his mom has a point, and that makes him realize that Rebecca has helped him grow as well.

The sad thing is that Josh’s sisters all grew up and started their own lives just fine. Josh had to be shoved out into the world, if Hector’s mom’s house can be called the world, when his mom get impatient to fulfill her own goals and needs. For as long as we’ve known him, Josh has depended on the women in his life to do the emotional work for him and to make the big life decisions. When he does make a hard decision, he tends to leave the hard parts to someone else, like when Rebecca got him his job at Aloha Tech, or Father Brah broke up with Rebecca.

Through his talks with his mom, Josh realizes that Rebecca has raised his expectations for his own life, so that now he can’t be happy with the slacker life he’d enjoyed before. He goes to Rebecca’s to thank her for putting ideas in his head, which was good for Rebecca to hear, since she is generally only told how toxic she is these days. But so far he doesn’t have a clue as to what he wants to do with these high expectations. We know that priest school is out, and NYC, but that’s about it.

Seeing him act so mature around Rebecca, and then hearing Rebecca echo Lourdes when she kicked Josh out because she had someplace to be, got me scared that he’ll gain 40 IQ points and a college degree next season so that he can be the perfect man for her after all. 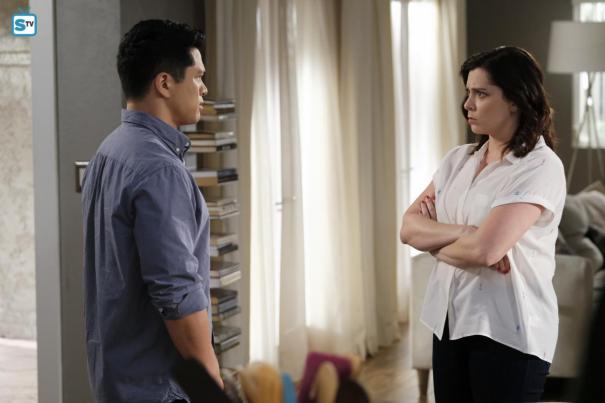 Meanwhile, Paula was given a taste of her own scheming medicine by the young woman she stalked and attempted to coerce into donating an egg to Darryl. Then Paula showed a complete lack of self-awareness as to the offensiveness of her own actions, while picking Darryl apart for trivial perceived faults. She did eventually realize that over the years her meddling has hurt the people she was trying to help, but no regrets for the other people she hurt while trying to help her friends.

She finds Darryl catalog shopping for egg donors, and takes over the process, quickly eliminating all but one donor based on characteristics like dimples, vegetarianism, and liking cats. But that donor turns out to have withdrawn her last egg from availability, so Paula pulls out her stalking stills. Paula finds out the woman’s identifying information, even though that’s illegal, and follows her to the park. Paula sits down and illegally tries to coerce the woman into donating an egg she doesn’t want to give away, including offering to bribe the donor. Also illegal. The donor threatens to call the police, and they end at a stalemate.

Later, the donor finds Paula outside the office, and says she’s decided that Darryl can have her egg after all, but she has conditions. Paula’s so excited that she doesn’t stop to get the details, she just runs inside to tell Darryl the news.

Darryl has been busy getting his sperm tested to make sure it’s viable, which hadn’t occurred to him until Paula brought it up. But, no worries, he practically has supersperm, at least according to his song and dance celebrating the test results.

The egg is fertilized and they wait for results. The donor calls Paula to let her know the terms of the deal. Since Paula approached her illegally, she wants a monthly payment for the rest of the baby’s life, in exchange for not going to the police. Paula is horrified that someone else would resort to blackmail. Then the donor pulls out a cigarette. How could Paula have been so wrong about a person based on a photo in a catalog and a three line description???

The fertilization of the egg doesn’t take. Paula is relieved, but Darryl is devastated. He can only afford one egg a year. Paula says she’ll continue helping him.

Rebecca is getting bored at home, since she hasn’t gone back to work, and building up to full on obsession with Nathaniel, the kind where it’s like glitter exploding in your face. She decides she needs to take care of him, starting with retroactively giving him a more loving childhood. To this end, she blackmails George into becoming her stalking buddy with the threat that she’ll make another suicide attempt if he doesn’t help her.

The show never addresses this part of her manipulative behavior, in her therapy or otherwise, it’s just played for a joke. As is her group therapy session, where we meet her wacky and annoying fellow BPD sufferers, who spend the group therapy session bickering like out of control children. This show can’t decide whether it wants to cover mental illness respectfully and accurately, or if it wants to play up the mocking humor and stereotypes about the mentally ill that the writers have probably been saving up for months.

Rebecca has George steal Nathan’s father’s calendar, and then they attempt to “accidentally” run into Mr Plympton at the golf course. Except he gets dropped off by one car and gets straight into another, driven by a woman. Rebecca and George follow him, discovering that he’s going to the woman’s home, where her daughter comes out and gives Mr Plympton a very familiar greeting as well. That’s all it takes for Rebecca to be sure that the mother is Mr Plympton’s mistress, and the daughter is Nathaniel’s sister. Of course she assumes Nathaniel doesn’t know about them.

Rebecca immediately creates an elaborate scheme that involves a car accident, George, and the Sugar Shack to engineer a meeting between the supposed siblings. Except they aren’t siblings. The girl’s mother was Mr Plympton’s secretary for 30 years, and now he pays the daughter’s college tuition. He wants to keep the payments under the radar, so he quietly visits them at home for lunch every once in a while.

Everyone is furious with Rebecca, for the car accident and the assumptions. She’s spent the week convincing her therapist that she was just doing a kind, generous thing for her boyfriend, not going overboard, but it’s hard for her to maintain that argument now. She realizes that this is going the same way that her relationship with Josh did, and she probably needs to be alone right now. Off camera cliffhanger break up ensues.

Where will Rebecca go from here? Paula figured out a long time ago to redirect her schemes and obsessions away from romantic ones requiring a stream of new men. Will Rebecca be able to make the transition?