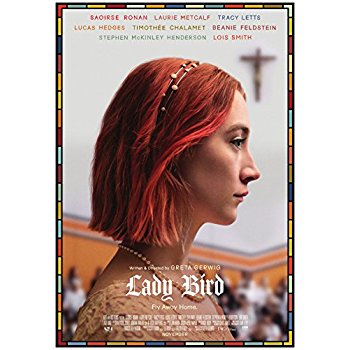 Lady Bird, the semi-autobiographical coming of age story written and directed by Greta Gerwig, is a perfectly constructed film that does exactly what it sets out to do, and does it beautifully. It’s a counterpart to the many, many thoughtful male coming of age stories that have been filmed over the years. The most recent one that comes to mind is Richard Linklater’s acclaimed 2014 film Boyhood.

Except Boyhood was so long and dragged so much that I don’t think I even finished watching it, while Lady Bird is a brief 93 minutes that’s evenly paced, charming and has no padding. Lady Bird follows Christine “Lady Bird” McPherson through her senior year in high school, as she navigates life in a liberalish Catholic high school; tries on various identities and friendship cliques; dreams about life in a more exciting, glamorous place than her hometown of Sacramento, California; and tests the waters of sex and romance.

Through all of this, her working class family is dealing with the realities of a changing economy and shattered dreams of their own. Lady Bird has a difficult relationship with her complicated mother, Marion (Laurie Metcalf), a dutiful woman who’s working double shifts to keep the family afloat financially because Lady Bird’s dad, Larry (Tracy Letts), lost his job and can’t find another. Her brother, Miguel (Jordan Rodrigues), and his girlfriend, Shelly (Marielle Scott), also live with the family, and are college graduates who work as cashiers because they can’t find jobs in their fields.

The family still lives in their “starter house” on the cheap side of town, of which Marion is ashamed. But Marion also bristles when Lady Bird refers to their neighborhood as being on the wrong side of the tracks. Yet Marion’s favorite mother-daughter activity on a Sunday afternoon is to take Lady Bird to real estate open houses in the nicest neighborhoods in town, where they can dream that someday they’ll live in those houses. It’s no wonder that Lady Bird is left confused by her mother.

The family has stretched themselves financially to send Lady Bird to an expensive private school to keep her away from the violence her brother encountered in the local public high school, but that means that her friends are much wealthier than she is, and have certain expectations. Most of them live in the neighborhoods Lady Bird and Marion dream of living in.

Lady Bird’s parents had expectations for their own lives that they haven’t met, but they still want Lady Bird to meet. But they also don’t want her to aim too high, or get involved with anything that would cost much financially. All of this amounts to Lady Bird being a very young, sheltered girl who’s receiving so many mixed messages that it takes her a while to sort them all out.

We drop in on Lady Bird at the beginning of her senior year of high school, as she’s considering college applications and which school activities might look good on her applications. Lady Bird tells people that she wants to apply to schools on the East Coast, like the Ivy League, but not the Ivy League, because she’s not that smart.

Her mother doesn’t want her to go that far away, and doesn’t think they can afford an out-of-state school, so she tenses up and strongly discourages the subject whenever it comes up. Marion is the queen of backhanded complements and mixed messages, passive-aggressively hypercritical of everything, and spilling over into outright criticism when she’s angry or stressed. Too many of us can relate to that. For me, it was my grandmother instead of my mother, but it made those scenes hard to get through.

Lady Bird is left to sneak around, saving money for the extra applications from her after school job, having her dad help her fill them out and mail them in secret, then racing to check the incoming mail for acceptance letters before her mother sees them.

In the meantime, she uses her senior year to experiment with all of the other aspects of life that she hasn’t lived yet. She dates a couple of boys, Danny (Lucas Hedges), the boy from the high school theater group who seems too good to be true, and Kyle (Timothée Chalamet), who plays in a local band and is nihilisticly emo. She loses her virginity in a not very satisfying or romantic, but actually pretty realistic, way. She tells her best friend that do-it-yourself sex is more satisfying than teenage boys, and we all nod sagely along with her. And hope she has better luck in college.

Lady Bird starts the year with a BFF and fellow misfit, Julie (Beanie Feldstein), who’s exactly the kind of sweet, loyal, wise friend we all wish we’d had growing up. But, because Lady Bird has always had her, she doesn’t appreciate how lucky she is to have Julie. Between Julie getting the lead in the school musical, Lady Bird dating boys, and Lady Bird’s social machinations in order to get closer to the boy she wants to date, they grow apart for a time. No coming of age movie would be complete without learning the value of true friends, and the way that your best girlfriends will long outlast temporary lovers.

Lady Bird doesn’t go for huge, dramatic moments or giant laughs. Instead, it’s quietly meaningful throughout, with one moment of truthful recognition after another. The film takes place in 2002, and does locate itself in that period, but it could also convincingly have happened at any time since 1950. The characters and the story are so relatable, and the setting is so typically post-war American, that anyone who went to a suburban American high school should find something to relate to in it. In that way it should join the canon of essential teenage films like American Graffiti, Fast Times at Ridgemont High, and the John Hughes films, movies that take place in a certain era but also speak to the universal adolescent experience.

We watch as over the course of a year Lady Bird uses the experiences she seeks out and the ones that just happen to her to mature and grow. By the time she goes to college, she still young, and still makes mistakes, but she’s ready to make them independently, and she realizes the value of what she’s leaving behind. Her story shows an intelligent young woman, who is eager to grow up, discovering herself while also learning about the world and the people around her.

Most importantly, the film is respectful toward teenage girls. Lady Bird, her friends, her interests, her issues, her dreams, her likes, her dislikes, and everything about her are treated like they matter as much as the same factors would in an adult or in a boy.

In our culture, the interests of teenage boys drive the economy, while girls are taught from the time they are born that there is nothing sillier, more trivial, or more stupid than a teenage girl and her interests. Any time that stereotype can be subverted, and the truth of teenage girls can break through the noise of modern media misogyny, it’s a victory. Kudos to Greta Gerwig for getting her film made and getting it noticed. 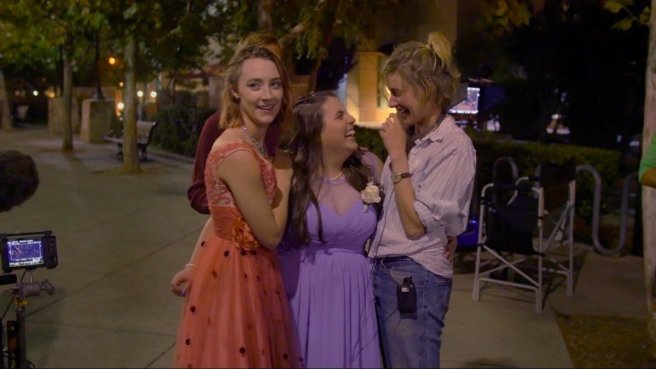 Laurie Metcalf is amazing, as everyone has noted, but she’s so good that she’s hard to watch if you’ve every had a hypercritical martyr in your life.

Beanie Feldstein sparkles as Julie, who isn’t popular in high school, but who knows who she is. We watch her blossom over the course of the year as well, though much of it is from afar.

Christine renames herself Lady Bird, just to show her independence and try on a new identity. Metamaiden insisted on going by the name Olive through most of high school, instead of the name we gave her, Sarah. She still has a second Facebook page with that name.

Lois Smith and Stephen Henderson, as a kindly elderly nun and priest, respectively, who work at Lady Bird’s school, both turn in the kind of sensitive, nuanced performance they’re known for.

The depth of the supporting characters and the quality of the performances are a big part of what make this such a great movie. The script avoids the stock characters that are so typical of these films. It manages to make everyone feel like a real, fully developed person, sometimes with only a few lines of dialogue.

Sacramento is also shown as a very real place, from the wealthy neighborhood, to the wrong side of the tracks, the teen hangouts, and the mom’s workplace. It’s so much better when a film goes to the actual story location for exteriors, if those are going to be an important part of the film, as they are here. I’ve lived in locations where movies are supposed to take place, but they very clearly weren’t even shot in the same region of the country. It ruins the atmosphere when a completely different skyline or courthouse show up.

I love the opening scenes in the hotel and the car, where Lady Bird and Marion both show us exactly who they are. Marion pretends that she’s down to earth and fine with being average, but she also cares desperately what everyone else thinks of her, as evidenced by the way she makes sure that the hotel bed is made perfectly before they leave. She’s scared of so many things, and deals with her fear by trying to control every possible variable in life. She goes so far as to break the spirit of the people around her if it will allow her to keep them closer and safely under her control.

Lady Bird is strong-willed and independent, and won’t let anyone change her mind, no matter what it takes to resist. She throws herself out of the car while it’s speeding down the highway for complicated reasons that she probably couldn’t even explain.

Her reasons for throwing herself out of the car echo throughout the rest of the film. She needs to get away from the damaging vitriol that her mother is spewing before her hopes and dreams are completely crushed. She needs to have something real happen to her instead of living in a sheltered hamster ball and never taking chances, the way her mother wants her to. She needs to plain old rebel and spite her mother, to wrest back some control of her life.

But it’s also a piece of performance art, a statement to the world of her desperation and bravery, a Here I Am and This Is Who I Am. In a weird way, it’s part of the culture that she was just talking about wanting to find, the daring East Coast world of independent artists who make their strong statements to the world and hope that the world will listen and appreciate them.

It’s her wake up call to both herself and her mother that she’s done with being a child.