Netflix has given us some great news to start the weekend! They’ve finally officially announced the season 2 renewal of their neo noir sci fi thriller Altered Carbon. It seems they were waiting to make the announcement until they could also announce who the new co-showrunner and star would be.

Anthony Mackie, who’s most well-known for playing the Falcon/Sam Wilson in the MCU Captain America and Avengers films, will play the new sleeve of former Envoy and Protectorate soldier Takeshi Kovacs. Mackie has been in numerous other films, notably the critically acclaimed The Hurt Locker. His only other major foray into television was the 2016 HBO film All the Way, in which Mackie played Martin Luther King, Jr opposite Bryan Cranston’s Lyndon Johnson. That film was also well received.

There’s no word yet on who else from the season 1 ensemble might reprise their roles in season 2. The books that the series is based on take place hundreds of years apart and on different planets, so it’s likely that few, if any of the Earth-based characters from Kovacs’ days in Ryker’s sleeve will be involved, unless they’ve continued to clone themselves or are also played by new actors representing new sleeves.

On the other hand, the flashback characters have a good chance of continuing, as Kovacs’ previous life continues to unfold onscreen and influence his search for Quellcrist Falconer and his own inner and outer journeys. I want to see more of the Byron Mann sleeve’s part of the story, for one. The AIs, like Poe (he’s NOT DEAD 😾), and characters who live in synth bodies, like Lizzie Elliot, could also go on indefinitely.

Anthony Mackie could be a good choice for Kovacs. He’s a recognizable name these days, so he’ll draw new viewers, and this is a different kind of role for him. Even though he’s proven himself to be talented and versatile, he isn’t given the chance to play lead often. He can do the depth of seriousness and sadness that Kovacs requires, but he’s also known for his sense of humor, so producing Kovacs’ wall of sarcastic remarks won’t be a problem. He’s proven that he can also handle whatever physical challenges are thrown at him as an actor, so the physicality of the role won’t be an issue. I’m really looking forward to seeing what he does with the role and how the writers tailor their writing to him. 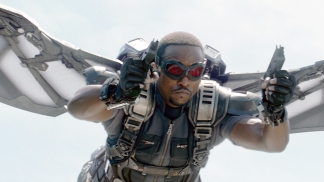 Anthony Mackie as the Falcon (Disney/Marvel) 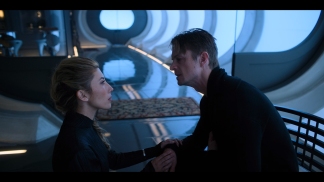 Netflix also announced that showrunner Laeta Kalogridis will be joined in season 2 by a new co-showrunner, Alison Schapker, who has been an executive producer or producer on Fringe, Alias, The Flash, Brothers and Sisters, Lost, Charmed and Scandal. Those are all shows with some great female characters, many of them as leads. There’s a lot of influence from Greg Berlanti in the roster, which is worrisome, since he puts women in the forefront then degrades and undermines them. But Schapker’s most recent experience is on the Shonda Rhimes show Scandal, so hopefully she will create characters who are people first, rather than working with a hierarchical set of rules for what the women and people of color are allowed. If nothing else, it would certainly be a plus for Schapker to temper the tendency toward torture porn that Kalogridis showed in season 1.

Season 2 is expected to premiere in 2019 and consist of 8 episodes, down from season 1’s 10 episode run. The trimmed order could be a good thing for the show, since there were times that season 1 felt bloated and could have benefitted from tighter editing. It was gorgeous and I loved it, but the creators did get carried away with their own vision. On the other hand, I’d hate for the show to become so fast-paced and action-oriented that it loses its emphasis on character and visual style.