Time for an update on Netflix’s cyberpunk bodyswapping series Altered Carbon, which got off to a slow start, but, according to Google Trends, ended up being the 2nd most searched for TV show title of 2018. Netflix has been slow in releasing news about season 2, with little known so far about the plot or returning cast, but, finally, tidbits of information are starting to appear.

According to the trade publication Production Weekly, production has started on season 2, with filming expected to run from early February through the end of June. Season 2 will film in Vancouver and Surrey.

It’s likely that post production will take several months to incorporate all of the CGI elements, so the release date will probably be late 2019 or early 2020.

There are rumors that this season will have 8 episodes, but I haven’t found an official source for that number, so take it with a grain of salt.

Creator and season 1 showrunner Laeta Kalogridis is being joined by Alison Schapker as co-showrunner for season 2. Schapker has been a producer on classics such as Lost, Fringe, Alias and Almost Human, so she brings some great experience to the show. 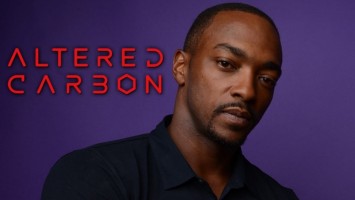 As reported earlier, Anthony Mackie will be taking over the role of Takeshi Kovacs from Joel Kinnaman, who only signed on for one season, and who’s also departing for obvious story reasons. No other casting news has been announced, but I’m making an educated guess that most of the ground-level, human, present day characters will be left behind.

Wealthy characters (meths) have more likelihood and reason to travel and to still be alive and have clones on multiple planets after a time jump. Characters who lived in flashbacks also have the chance to be seen in more flashbacks, such as Quell, both past Taks, Rei and Jaeger. Anyone who doesn’t live in a human body also has a greater chance of surviving a time jump and a space jump with a body that looks the same, such as Lizzie, Poe or Carnage.

(Poe is alive. He sent his consciousness into the internet and he lives there. I will fight you on this, though I am a peaceable person.)

Nothing official has been released about the plot for season 2 yet, but showrunner Laeta Kalogridis has given some hints:

“As I’ve mentioned to Richard, the second book is a little expensive. It’s a giant interstellar war with a huge ship full of aliens. He wrote the second book like it was a $300 million, two-hour feature,” – Indiewire

“My first thought is that we want to do something surprising with the second season that is not in the same place with the same people. I think the universe of these books gives you more latitude.

Is Poe really gone? There wasn’t a back-up of him on a hard drive somewhere?
The things that I find really interesting about Poe is the concept of a character who knew everything, and had everything at his fingertips all the time, being very damaged and not knowing everything. He wants to be human, but part of humanity is a level of imperfection that Poe doesn’t possess. That’s interesting to me. What we’re going to do with that, I don’t know. But I will say Poe has lost Lizzie (Haley Law) forever. There’s no ever-after for those two.

And Kovacs’ sister Reileen is dead?
Yes. Within the world of Altered Carbon, she is real-dead, stack-dead, all of her backups are corrupted. Kovacs did succeed in completely destroying the person you saw. I would argue that they bookend each other as brother and sister; she chooses that. When she says, “Go ahead, do it,” she chose to die, she didn’t want to continue living. She got a look in his eyes at the mirror of herself. But the story of Altered Carbon is not told as a linear story, so we could see Reileen at another point in her life. But that version of Reileen who faced off against her brother at the Head in the Clouds is gone.

Our critic Darren Franich was like: What would be cool is if Kovacs was spun-up again in season 2 and the only sleeve available was Reileen’s…
Oh, that’s creepy as s—t! I can honestly tell you I’ve never thought about that. Seriously, there’s something about that that creeps me out. I totally have thought about Kovacs being a woman. I’ve discussed that with the studio and network precisely because I think that’s part of the promise of this type of story — you can explore what those gender differences mean from the inside and not just the outside. But no, we haven’t thought of that.

The first season roughly followed the first book by Richard K Morgan. Will the second season follow his second book, Broken Angels, or will it be its own thing?
That’s a very expensive book! With space battles and giant portals and huge warships that are orbiting the planet and a thermonuclear explosion. Richard came and worked with us in the writers’ room for a couple weeks to try and hammer out a story that was able to use elements of the second book without creating the vastness that is the second book. Also, the stuff we created in the first season that conflated some elements from the third book — like bring Quell (Renee Elise Goldsberry) into the story earlier — that also altered the structure significantly. So now you have this character who wasn’t in the second book and I hope if we’ve done our job people will be very invested in this love story. So that becomes very much a part of what we’re doing . … The idea was to mimic what the books do, which is to go from planet to planet and not stay in the same city. So the intent would not be to return to Bay City for the second season. Part of what I love about the books is the degree to which they hold up a mirror to the idea of faster-than-light travel by entangled consciousness downloading. That’s what needlecasting would be; you’re re-creating a consciousness far faster than the speed of light on another planet — and that’s just too cool not to do something with. Richard and I have a plan, I don’t know how people will feel about the plan, but we do have one!

The second book also has a 30-year time jump…
I’m not ruling that out, especially in a world where you can clone people or 3D print people. The emotional passage of time is always a good thing. I wouldn’t want to do a 250-year jump again, but I like in the second book where emotionally Kovacs is at due to what’s happened to him in the interim.” –EW

So, we can glean from this that Kalogridis worked with Altered Carbon book author Richard Morgan to create the storyline for season 2. They aren’t following the plot of book 2, Broken Angels, verbatim, which makes sense, since season 1 deviated so far from the books and incorporated material from book 3. They do intend to keep some elements, like a relatively small time jump, a change of city and possibly planet, and a new cast of local characters.

But some characters from season 1 will be seen again. She hints specifically at Quell, Rei and Poe continuing on in some way. She mentions that she hopes people are very invested in the Tak/Quell love story. Season one ended with the set up for The Search for Quell, either for a season 2 arc or for a series long arc. Tak can scour the galaxy for clues about Quell’s whereabouts and work as a detective and mercenary for hire, while remembering his checkered past and getting to know colorful local characters.

She also says that Altered Carbon isn’t a linear story, which means we’ll continue to learn about the characters’ pasts through flashbacks, and could even have flashforwards at some point. We barely touched the surface of Tak, Quell and Rei’s lives in season 1, nevermind intriguing characters like Jaeger and Tak’s partner Sarah. Taking time to explore more of their lives would continue to add depth to the characters and the Altered Carbon universe.

I thought it was weird she mentioned that Poe and Lizzie aren’t getting a happily ever after. I really saw them as having a father-daughter vibe instead of a romantic thing. I’m going to pretend I didn’t read that she referred to them that way, because maybe they could eventually convince me to accept a romance between the two, but right now it feels icky. Lizzie was assaulted in every way possible. She needed care and support, not another man who wanted something from her. Poe’s avatar of a much older man is too triggering in that regard, especially given the talk between the other AIs.

Altered Carbon is getting a Netflix anime series, in addition to the live action series, which will further explore the show’s universe. The series, which is already in production, “comes from the animation studio, Anima and will be written by Dai Sato (Cowboy Bebop, Samurai Champloo) and Tsukasa Kondo.” (Deadline)