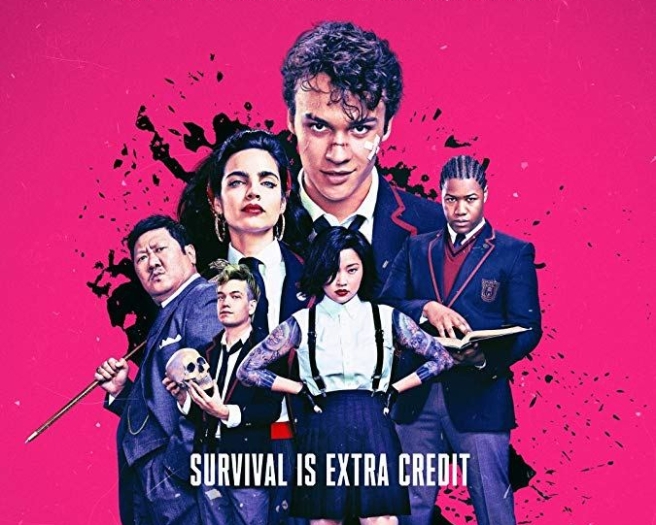 Hello, fellow assassins! Winter break is over, and it’s time to join Marcus Lopez and the gang for a new semester of learning and hijinks at  King’s Dominion Atelier of the Deadly Arts, a top-secret high school in San Francisco. Our story will follow a sincere, loveable orphan whose life has been filled with tragedy and who is fated to be involved with even more death. He’s an outsider in the world of his new school, but he quickly makes both friends and enemies. His new nemesis, Chico, is from an old family which has some similarities to Marcus’ family, but Marcus doesn’t like their style, so he rejects Chico’s hereditary group, insulting Chico along the way.

Okay, I’ll stop. The similarities between Harry Potter and Deadly Class are fun to watch for, though, and there are many more. But even with so many standard coming of age tropes and Harry Potter references, Deadly Class is still fresh and original. It takes place in the late 80s, when punk, punk-pop and new wave ruled both the airwaves and fashion, and the show takes full advantage of those styles.

Ronald Reagan was president, and the long and short-term damage he did to health care, mental health care, and the poor is front and center in the story. This show has a political point of view, and there’s no question where it stands. The parallels with the present day are hard to miss, right down to the homeless living in tent cities that are rife with violent crime.

Deadly Class is shot beautifully, and has a killer soundtrack. Both the images and sound have a sharp-edged clarity to them that fit both the 80s style and the needs of an assassin. The writing is also fast-paced and snappy, wasting no time, but having fun as it moves along. There are some real standouts among the cast, including everybody’s sweetheart, Lana Condor, MCU favorite Benedict Wong, Benjamin Wadsworth, María Gabriela de Faría, Liam James and Luke Tennie.

The premiere episode packs in introductions to the school, the gangs that the students belong to in lieu of houses, the students, the teachers, and Marcus’ back story. Somehow, it doesn’t feel too rushed. Some of the information is merely mentioned, but that’s enough for a first visit to a new universe. The story follows Marcus’ day closely, so we’ll undoubtedly learn more detail as he does.

Thematically, Deadly Class is dark, as you’d expect. But the school is about more than wanton murder. Students are encouraged to think things through, use strategy, and follow rules. They are also encouraged to fight for justice and to overthrow the ruling class. These are assassins with a philosophical streak, making Deadly Class more than just another teen comic book action show.

The show will need to walk a fine line with the level of bloodthirsty murder and exactly what the school condones. In this era of tragic vigilantism and mass shootings, most people won’t accept the idea that it’s okay for anyone to decide who deserves to live or die. The show needs to either temper these messages, or make it clear that this is fantasy and they are speaking in metaphor.

Deadly Class was created and executive produced by Joe and Anthony Russo, who made the last two Captain America and Avengers movies. It’s based on the Image Comics graphic novel of the same name by Rick Remender and Wes Craig. The premiere was directed by Lee Toland Krieger and written by Rick Remender & Miles Orion Feldsott.

That’s an all-male list. Hopefully the diversity behind the scenes will increase in future episodes, to match the diversity in front of the camera.