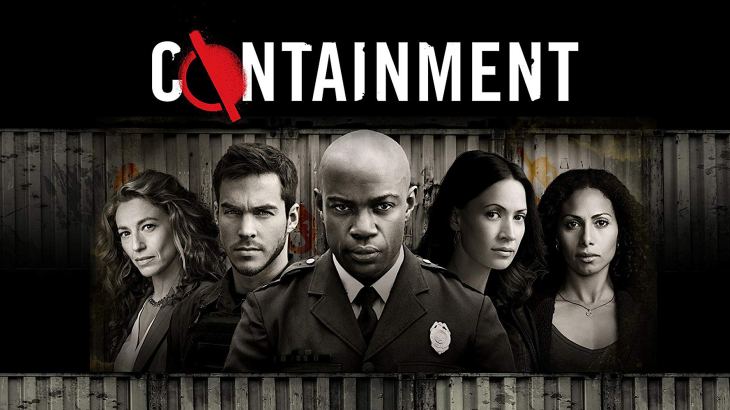 Containment, the story of a viral plague which erupts in Atlanta and the quarantine zone that’s set up to control its spread, was a limited series which ran for 13 episodes on The CW in the spring and summer of 2016. Like all CW shows, it now lives on Netflix. Because it aired during that odd time of the year that isn’t a traditional TV “season”, Containment didn’t get much attention at the time, and had mixed critical reviews. (Metawitches wasn’t around yet.) Metamaiden and I both thought it was a fun show, for the subject matter, and brought some things to the table that we rarely see when a plague is the main subject.

Containment takes place and was filmed in Atlanta, Georgia. Major Lex Carnahan and Officer Jake Rliey are both with the local police force. Lex is outside the quarantine zone, while Jake is inside. Jana Mayfield is a local office worker. Dr Victor Cannerts is an infectious disease specialist with the CDC who at the Atlanta hospital where the outbreak begins, Teresa Keaton is a pregnant high schooler, and Katie Frank is a teacher who’s brought her students on a field trip to tour the hospital. All four, plus Katie’s son and her students, are inside the quarantine zone when it’s closed up. Dr Sabine Lommers is with the CDC. She is sent to Atlanta the get the outbreak under control and works in the command center outside of the quarantine zone. Leo Greene is an investigative journalist who works with Lex to uncover the truth about the outbreak and the containment.

When a contagious, lethal virus breaks out in one area of Atlanta, federal authorities move quickly to establish a quarantine zone, called a “cordon sanitaire”. Anyone who is inside the zone when the wall is finished and sealed is stuck there. Anyone who is outside is not allowed inside. Friends and families are separated from each other, with little to no contact. They have no idea who’s living or dying inside or outside the containment area. As the virus rages on, the doctors inside the containment area work to find the cause of the contagion and a cure. Dr Cannerts is the lead investigator in the search for a treatment for the illness, but time is running out, supplies are limited, and tempers are on edge within the zone.

Outside of the zone, pressure mounts to find an explanation for the outbreak and a cure for the virus before it spreads. A cover up is slowly revealed and personalities clash. There is constant worry and disagreement over how much information to reveal to the general public, as the authorities weigh keeping the population safe from contamination against causing more panic.

Inside the zone, the rule of law breaks down. There aren’t enough law enforcement agents inside to police the area, and gangs begin to reroute medical, food and water supplies for their own benefit. Crime becomes rampant, and there is no place to dispose of the dead. The virus isn’t well-understood at first, so it’s difficult to get residents to understand how to avoid contagion or to stay indoors.

Even though I’ve just described this as a disaster area, none of it is done in a sensationalist way. The focus remains on the ground, with the characters and their plight. The plague is ever-present, and people die, but we care because of who they are as people as much as we care that the virus has spread. David Gyasi, Chris Wood, Kristen Gutoskie, Claudia Black and George Young all made their characters particularly compelling.

The peril and the mystery grow over the course of the season, as the potential explanations for the cause of the virus shift and become more ominous. No one is safe from the virus, which is as it should be, but residents of the quarantine zone also come up with ingenious ways to protect themselves.

The season ends with both tragedy and hope, as some mysteries are solved, some characters are lost, and some have grown into heroes. It’s a satisfying ending but there were openings left for a season 2 that didn’t happen.

ETA 3/22/20: 2021 might be a good time for the CW to consider reviving this show! They could pick up the action 1 year later, after the virus has become a global pandemic, and work with whoever from the original cast is available. Some, like Chris Wood, have commitments to other shows.

One of the aspects that I particularly liked about this show was the way it showed how being cut off from the normal infrastructure of society, which we all take for granted everyday, very quickly led to hardships. Even though these people were still in the middle of Atlanta, with police patrolling and pharmacies and groceries operating mere steps away, on the other side of a hastily erected wall, the people inside the barrier had to go without their necessary medications, without food, without clean drinking water, and without police protection. 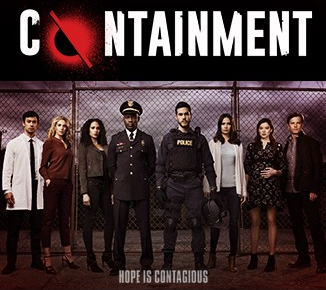 They became refugees within their own country. Their countrymen were too afraid of what they represented to show them the kind of compassion that would make a difference. The authorites outside the containment zone declared the people on the inside potential collateral damage, and wrote them off, considering them as potential sources of data rather than as individual human beings. Watching how quickly some government employees turn people into numbers was more frightening than watching people get sick.

Metamaiden would also like you to know that this is the hottest Chris Wood has ever been. It’s my favorite romance of his. The relationships don’t overwhelm the show, but there are several, ranging from a high school couple who are about to have a baby to an elderly couple who struggle with the physical challenges of the quarantine. The couples and families give the show it’s humanity and relatability.

Grade for season: B+

Image courtesy of The CW.

One thought on “The CW’s Containment: Review of Entire Series”