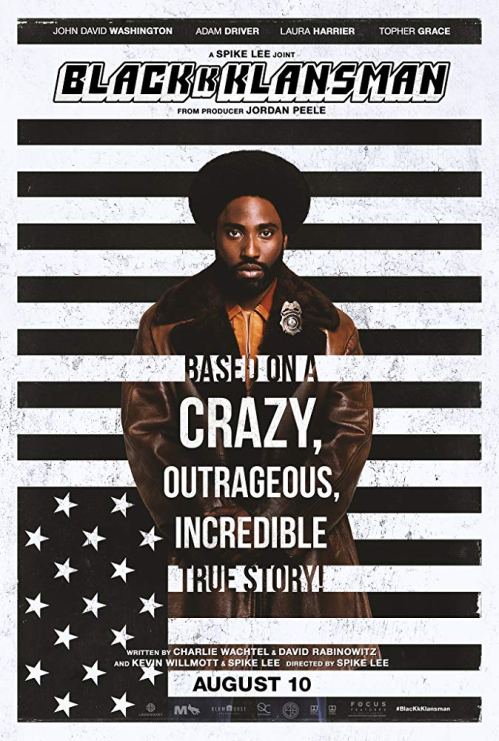 BlacKkKlanman is a comedy-drama film that is a semi-fictionalized version of the true story of Ron Stallworth, the first black cop in Colorado Springs, CO. It follows his rise from a desk job to becoming an undercover detective, working on a case based on a classified ad he saw in the newspaper, recruiting new members of the white supremacist organization the Ku Klux Klan.

Sometime in the 1970s (exactly when depends on whether it’s the book or movie) Ron Stallworth was hired to begin the integration process in the Colorado Springs Police Department. He quickly worked his way up to doing undercover work, as his superiors realized that there were places they could send him that no one else could go, such as Black Power protest rallies. Then Stallworth clipped an ad for the KKK from the local newspaper, and used it to begin an investigation into the racist group.

As a black man, Stallworth could only make phone contact with the KKK. He couldn’t meet with them in person. So he was assigned another cop to work with, Flip Zimmerman, who would play “Ron Stallworth” during in-person meetings with the Klan.

At the same time, Ron continued to investigate/date Patrice Dumas, the president of the black student union at Colorado College and the Civil Rights activities they were involved with. Patrice believed that all cops were white and racist. She thought that even a black cop would be a tool of institutionalized racism. Ron remained undercover with her.

Gradually, Ron and Flip make progress with the KKK and Ron finds out more about the black students’ plans. While the black students have mostly vague and unorganized plans for anything beyond a march or rally, the Klan members are largely current and former members of the military who know how to use weapons, plan an op and stick with it until completion.

Meanwhile, the mental health of some of the Klan members is volatile, leaving them paranoid and always on the edge of violence. They make Flip prove his worthiness multiple times, coming scarily close to learning his true identity.

This film is full of excellent performances, most especially from John David Washington (Ron) and Adam Driver (Flip). Washington strikes just the right tone as he moves between his life as a cop and a Klansman, where he essentially has to pass as a particularly dark skinned, deep voiced white man, and his life with Patrice, where he has to convince her that civil rights are important to him, but he doesn’t think all police or all white people are bad, either. The character, and the film, show nuance that isn’t often seen in films about the relationships between blacks and whites.

Adam Driver plays the reverse role. Flip is a secular Jew who’s reminded that bigots don’t care if he practices the religion or not. He’s always thought of himself as white, not Jewish. Now he realizes how Jewish he is, but he has to pretend to be a white anti-semite.

When he took the Klan oath and swore to hate himself, I wanted to be sick. Those are some subtle digs at institutionalized and internalized racism, how complicated it can get, and how hard it is to root it all out of yourself, even, or maybe especially, when it causes self-loathing.

On top of that, Flip, who is perfectly named, has to pretend that he’s the white version of a black man. Spike Lee couldn’t resist going for some cultural justice with that move. Ron has to teach Flip the proper, educated-sounding way to speak using Ron’s “white voice”, a voice which Ron later uses to impress longtime national Klan leader David Duke. It’s a level of absurdity I adore, with some very harsh truths rolled up inside.

Jasper Pääkkönen as Felix Kendrickson and Paul Walter Hauser as Ivanhoe are the two biggest scene stealers in the film, in parts that could have been forgettable. Jasper makes Felix a twitchy loose cannon that you’re waiting to see explode, with increasing tension, every minute he’s on screen. I’m not sure Hauser/ Ivanhoe closed his mouth the entire time he was on screen. The character is the epitomy of an inbred mouthbreather who was dropped on his head too many times as an infant. Hauser made his overconfident cluelessness look effortless.

Frederick Weller as Patrolman Andy Landers, the worst and sleaziest racist on the force, also deserves an honorable mention. Marshall Marshall is a hometown boy here in Albuquerque, where In Plain Sight was filmed. I’m sad to see the Marshall knocked down to beat cop and forced to transfer up to Colorado Springs, but he was delightfully repulsive in the role.

While two-thirds of the film covers a fictionalized version of Stallworth’s Klan investigation, other real moments in the history of race relations are slipped in, which give context to the story. The 1915 silent film “Birth of a Nation”, which recounted the beginnings of the Klan and became a national sensation, is highlighted. Veteran performer Harry Bellafonte gives a powerful performance as Jerome Turner, who speaks to Patrice and the Colorado College Black Student Union about his memories of the horrific lynching of Jesse Washington in Waco, TX in 1916.

Some of BlacKkKlansman’s most moving moments come at the end, when actual video footage from the recent white supremacist rallies in Charlottesville, VA is shown, combined with footage of Donald Trump and the real David Duke responding to the events in Charlottesville. Heather Heyer, the female protester who was killed when one of the white supremacists purposely drove his car into the crowd, is memorialized at the end of the film. This was especially appreciated, given how quickly her sacrifice was forgotten by mainstream media.

I only have a few tiny complaints about the film. The sound was annoyingly uneven. Watching at home, it can be adjusted frequently. It must have been extra annoying in theaters.

I wish they’d either stuck closer to the truth of Stallman’s story, or made it clear which parts were fictionalized. The true story has more political conspiracy and is less action-oriented than this film. The identity of Stallworth’s partner has never been revealed, because of his contact with the KKK. Spike Lee made the character Jewish for dramatic purposes. The actual events of the film happened in 1979 but Lee moved the time frame to 1972.

“While the first third of the film is relatively accurate, the KKK’s bomb plot is a fabrication to add dramatic tension; the real chapter that Stallworth and his partner infiltrated was primarily concerned with insinuating its members into high-ranking military positions. As a result of the investigation, four members of the US military were reassigned [to isolated areas].” (Wiki)

The real truth I want to know is: Did Stallman actually keep his hair that perfect at all times? That man has truly impressive hair.

BlacKkKlansman is a thought-provoking, entertaining film from Spike Lee and Jordan Peele. The film shows a unique episode of history when a black police officer was able to bring down a local chapter of the KKK.