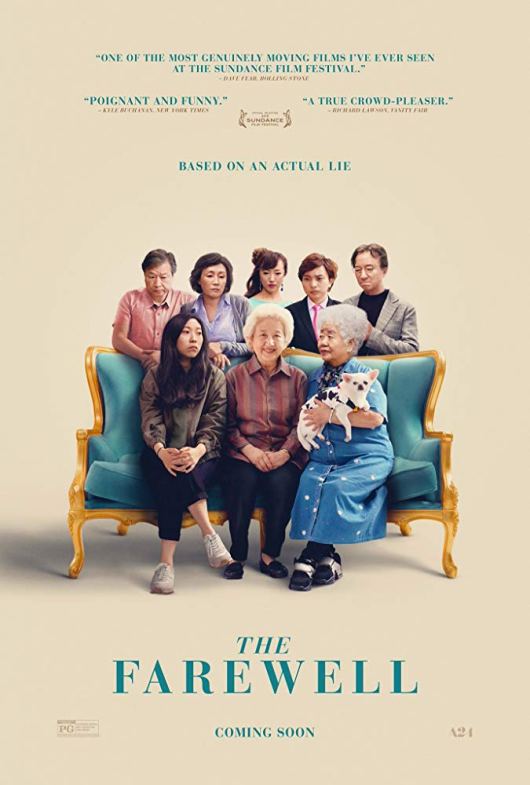 In The Farewell, writer-director Lulu Wang tells the true story of a giant fiction her family created together as a kindness toward her dying grandmother. It’s a complicated story, full of truths and lies and messy family relationships that aren’t easily pinned down into simple words, beyond the word “real”. Despite the fact that this is a story about lies, Wang’s film is painfully honest, showing the love that went into the decisions her family made when her grandmother was diagnosed with terminal lung cancer.

The Chinese have a tradition of withholding the news of a terminal diagnosis from the patient for as long as possible, so that the patient will stay optimistic rather than have their health be negatively affected by the stress of their true level of illness. It’s believed that this improves the patient’s chances of living longer and healthier. The patient’s family carries the burden of knowledge of the diagnosis for them, enduring the suffering in their place. The patient is only told when the end is near and the news can no longer be kept from them.

In The Farewell, as in real life, the family contrives to use the rushed wedding of grandson Hao Hao (Chen Han) as an excuse to hold a reunion of farflung relatives who haven’t gathered together at the same time in 25 years. Awkwafina (Crazy Rich Asians) plays Billi, a struggling young Chinese-American writer who is told by her parents that she isn’t invited because they are afraid she’ll reveal the secret to her grandmother, Nai Nai (Zhao Shuzhen).

Billi, who is based on Wang herself, is close to her grandmother and takes the news hard. She travels to China to attend the wedding anyway, arriving shortly after her parents (Diana Lin as Lu Jian and Tzi Ma as Haiyan Wang). After she assures them that she can control her emotions so that Nai Nai won’t guess that anything is wrong, they give in and accept her presence.

The preparations for the wedding are hectic, with much socializing between errands. Nai Nai is in her element, clearly loving having her entire family home to boss around and give motherly advice to. She doesn’t suspect the real reason for the gathering, but she senses that some of her family members are extra emotional.

Nai Nai’s illness acts up during the reunion, giving Billi the chance to voice her concerns to Dr. Song (Jim Liu) about Nai Nai’s condition and the secret keeping. He studied medicine in the West, so he understands her issues, but also speaks from the perspective of someone who has faced the same issue in his own family.

Billi’s uncle, Haibin (Jiang Yongbo), who now lives in Japan, also speaks with her about the cultural differences between the individualism of the West vs the collectivism of the East and how that affects the way people see themselves and what is expected of them. He notes that the identities of Easterners are much more rooted in their places within their families and their communities, rather than as individuals forging their own paths. Her aunt, Little Nai Nai (Lu Hong), who is Nai Nai’s main caretaker, also shares important insights.

Overall, The Farewell is a poignant blend of warmth, humor and tradition, just as family reunions inevitably are in real life. Lulu Wang uses her script to examine the traditions of both cultures she was raised in and to show how she and her family made peace with two such disparate styles, along with the impact of moving from one continent to another.

Many more relationships are quietly explored beyond the main one between granddaughter and grandmother. Billi’s relationship with her own mother is also rich, as is the relationship between the two elderly sisters, Nai Nai and Little Nai Nai. Billi’s mother, Lu Jian, who is Nai Nai’s daughter in law, gives her perspective on her relationship with her dying mother in law. As is typical of in law relationships, her perspective is a more complex view of the older woman, but she’s not unfair in her opinions. The scene is also used to clear the air of some long standing issues between Billi and her mother.

Wang illustrates how the four women’s relationships with each other form a dynamic system within the family, which then connects to the rest of the family system, forming a whole. This shows how the loss of Nai Nai will leave a hole in the family that no one else can fill.

On the male side, the two brothers are also given time to bond over their feelings about having both escaped the confines of their restrictive homeland but at the same time also having abandoned their aging parents. Everyone is given a turn to express their feelings about losing Nai Nai and seeing her but not actually being able to say a proper goodbye. To the family members who still live in China this is normal, but to the relatives who have lived in other cultures for many years it’s difficult, even though they accept the tradition.

The Farewell portrays messy, cluttered modern family life in a realistic style, which is consistent across the writing, directing and production styles. The film begins in New York then moves to Changchun, China. It was filmed a block from where Lulu Wang’s grandmother lives in real life. Cinematographer Anna Franquesa Solano has said that the main source of inspiration was spending time with Lulu Wang’s real family during pre-production in China.

I have lost 4 family members in the last 14 months, including my father and my husband’s mother, so this film hit close to home for me. I could relate to almost everything in it, from the lies and pressure to remain silent to the close bonds between the women and frantic wedding preparations. Watching it was cathartic, the way timeless films about big family events often are. The Farewell was balanced in its efforts to show a loving family that disagreed about many things, but tried to come together for the sake of the grandmother.

Writing this story was Lulu Wang’s way of processing the emotions of her real life experience. I’m glad she had the strength to tell such a personal story to the world and her family had the courage to give her permission to do so. It’s not easy to sort out the feelings that result from this type of experience. To be able to write such an articulate, moving script and then turn it into such an accomplished film is a true achievement. I look forward to following her career in the future.

Lulu Wang first explored this story as a spoken word essay on the NPR series “This American Life”. She shares a couple of insights in her 27 minute essay that didn’t make it into the film. I wish they had, because I was asking those exact questions while watching and they either weren’t addressed or needed more depth. But this is just a couple of small issues, not enough to detract from my enjoyment of the film.

The film ends by informing the audience that the real Nai Nai is still alive, 6 years after her diagnosis, even though she was only expected to live for a few months. Her sister, Little Nai Nai/Lu Hong, played herself in the film, and Nai Nai was able to visit the set to watch her sister and granddaughter at work. Maybe there’s something to be said after all for the love and protection that goes into the Chinese way of doing things.

“Make This Conversation in a Small Room with White Walls Work”: DP Anna Franquesa Solano on The Farewell

The Practical Reason Chinese Homes Have a Dining Table in the Living Room, According to ‘The Farewell’s’ Production Designer  — The attention to detail production designer Yong Ok Lee put into the film’s settings paid off, as they create the tone for the family’s interactions.

Awkwafina won the  Golden Globe Award for Best Actress in a Motion Picture – Comedy or Musical for her role in The Farewell. She was the first woman of Asian descent to win a Golden Globe in any lead actress film category.

You can listen to Lulu Wang’s essay “What You Don’t Know”  for free at the link. The transcript is available HERE. The essay is part of a multi-essay episode titled “In Defense of Ignorance”. Listen to the whole episode HERE and follow the links to downloads from Amazon and iTunes.