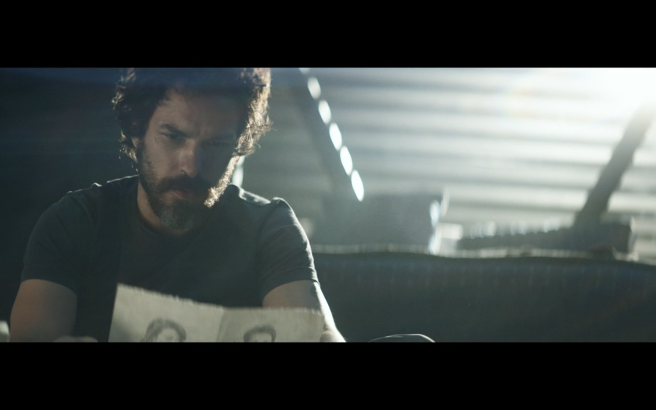 In episode 8 of Star Trek: Picard, Broken Pieces, La Sirena’s emergency holograms complain that their memories have been tampered with. And it’s not just major pieces of information about Rios’ former ship the Ibn Majid that have been removed. Mr Hospitality claims that seemingly trivial bits were deleted by Captain Rios, using the example that now he doesn’t know the proper temperature to serve Yridian tea at. The emergency navigation holo mentions that his knowledge of Medusan astronavigation is gone.

These two bits seem like they might just be comedic throwaway lines, but I think they’re much more. Telepathy links Yridian tea and the Medusans. It’s also an underplayed aspect of Star Trek: Picard.

Let’s start with the Medusans, a telepathic and empathic race of noncorporeal beings whose physical form makes them particularly suited to space travel. They are renowned navigators. However, the sight of their physical form causes madness and eventual death in humanoids unless viewed through a special visor. Even that can usually only be tolerated by Vulcans.

In contrast, the Medusans have beautiful minds, according to those with telepathic abilities who are able to communicate with them. Rios said that one of the synths who visited the Ibn Majid was named Beautiful Flower. Could Bruce Maddox and his collaborators have found a way for a Medusan to inhabit a synth body?

Both Soji and Dahj told Picard that their father bred orchids and named an orchid variety after each of them. In the Voyager episode Tuvix, Tuvok and Neelix discover a species of orchid that’s capable of symbiogenesis, the process of reproduction through merging with another species to create a completely new organism. In that episode, Tuvok and Neelix are merged into one person, then eventually separated into two separate beings again.

Maddox could have solved the problem of merging a positronic matrix with a flesh and blood body by incorporating this species of orchid from the Delta quadrant. The orchids aren’t just named after Dahj and Soji- they are part of each synth’s DNA.

The same could have been done for Beautiful Flower. A Medusan could have been anchored to a corporeal synth body using a process that involved the symbiogenetic orchid. The name Beautifal Flower incorporates the Beautiful Mind of the Medusan species and the Orchid Flower.

I suspect that wasn’t Beautiful Flower’s real name, but it’s a clue, along with Medusan astronavigation. He would have been telepathic and may have been the one to tamper with Rios’ memory after Captain Vandermeer turned hostile toward the synths. Since when do synths die from one pop from a phaser? I wouldn’t be at all surprised to find Beautiful Flower and Jana alive on the synth homeworld.

Rios has been working to cope with what happened on the Ibn Majid and to fix his memories. Those pips in the cigar box tell us that he’s sending signals to himself from his subconscious the way Data did in the TNG episode Cause and Effect.

Medusan astronavigation may have something to do with how the stars in the octonary system were moved, but we don’t know enough about either to solve that puzzle yet.

The ship’s emergency holo Mr Hospitality no longer knows the correct temperature at which to serve Yridian tea. Replicators are programmed with the tea, so theoretically he shouldn’t need to know- or does his lack include the replicator? This has to be another clue that Rios has left himself or that someone else deleted to stop him from following his memories to the truth.

The connection to the ST:Picard conspiracy is that Deanna Troi ordered Yridian tea while working on the case of a suicide on the Enterprise. That suicide was due to the accidental influence of a telepathic imprint in the ship’s plasma stream which had been created many years earlier during its construction at the Utopia Planetia Shipyard on Mars. The imprint was created from the traumatic thoughts of one of the crew who were building the ship. Deanna almost committed suicide due to being exposed to the influence of the imprint before the case was solved.

A telepathic imprint sounds like something the Zhat Vash could learn to weaponize. It also sounds like the technology that the Admonition uses.

But how would anyone other than Deanna know about the Yridian tea? Her own mind must have made a sensory connection between drinking the tea and working on that case, since it’s doubtful she’d mention the tea in her log. There must be another telepathic connection we’re unaware of who found out about the psychic imprint through Deanna and was also left with the impression of the tea she was drinking as she worked on the case.

Deanna herself may even inadvertently leave psychic imprints on files when she has strong emotions about them, as she does about this one, which a powerful telepath could sense. Commodore Oh or Beautiful Flower could be that telepath. Commodore Oh has had decades to comb through the Federation’s files in search of anything she could use.

I’m probably wrong about many of my leaps in logic, but I think I’m right that the Yridian tea refers to psychic imprints which are a danger to telepaths, which could pertain to the Admonition. And that the Medusans could be involved with Bruce Maddox and/or possibly Commodore Oh. There are powerful telepaths affecting events and memories. There might be time travel. Maybe the Medusans, with their noncorporeal bodies, have mastered that as well.

And those orchids are definitely important.

2 thoughts on “Star Trek: Picard- Beautiful Minds and Beautiful Flower with a Side of Yridian Tea- Two Clues Explained”