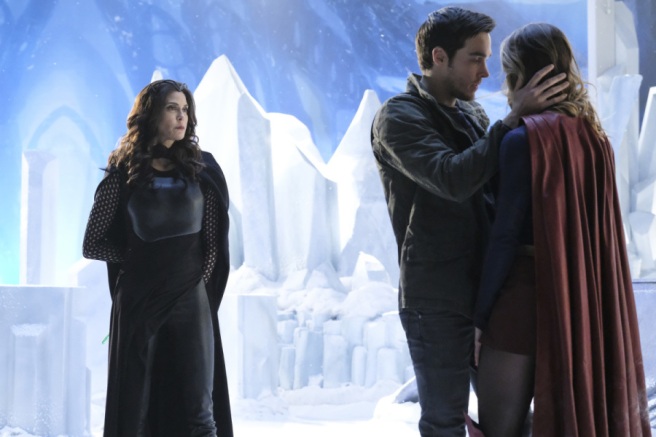 Last week, I asked for more Queen Rhea and King Lar Gand. This week, we got that, but it was definitely a case of “Be careful what you wish for.” On the bright side, Kara and Mon El are back to being a sweet, flirty couple, after their musical trip to The Flash. It’s Maggie and Alex’s turn to bring the angst. And we’re apparently going to pick up a dropped thread from the beginning of the season, since Secret Alien US President Lynda Carter is back to reveal her plans.

Kara wakes up to find Mon El making her breakfast in bed. He’s discovered cookbooks, and is applying them to his quest to romance her. His parents remain in orbit around Earth. In other words, they’re helicopter parents, TM Mon El.

The news reports show an attack in progress in National City. Kara makes a quick change and is off to the fight. Mon El will be a super partner and do laundry while she’s gone. Homemakers do important work too, okay? Kara easily beats the alien.

END_OF_DOCUMENT_TOKEN_TO_BE_REPLACED

Welcome to the first ever, epic, Flash-Supergirl-Legends-Arrow musical crossover episode! Did anyone actually get to join in from Arrow? Malcom Merlyn/John Barrowman was an Arrow character until he moved to Legends this year, so we’ll count him. This is a reunion of all sorts, with Grant Gustin, Melissa Benoist, and Darren Criss/Music Meister having starred together on Glee, various combinations having gone to college together, and others knowing each other through previous work or longtime friendship. Fun times all around.

Previously on The Flash and Supergirl, Kara broke up with her boyfriend, Mon El, because she found out that he’s actually the Crown Prince of Daxam, rather than a lowly palace guard as he’d originally told her. Her planet, Krypton, has always hated Daxam, its sister planet. The Kryptonians inadvertently destroyed Daxam, as well, when they destroyed their own planet, through their own environmental arrogance. Despite the fact that Mon El has a much better reason to hate Kara than she does to hate him, she continues to find reasons to nurture her racism while telling herself it’s in the name of truth and justice. It’s all very alt-right, while supposedly being feminist. Except the word feminism doesn’t mean what the Berlantiverse thinks it means.

END_OF_DOCUMENT_TOKEN_TO_BE_REPLACED 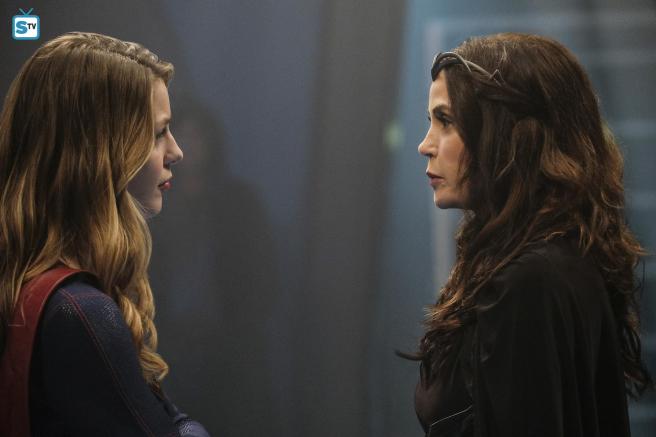 Sooo, it was an interesting night on Supergirl. We had three high profile guest stars. Winn was unlucky in love, AGAIN, but refused to accept it. Maggie and Alex officially deserve more screen time. Alex can get you Hamilton tickets if you need them.

Oh yeah. We also confirmed that Mon El is the Crown Prince of Daxam. And that he lied about this to Kara. Which she finds unforgivable. There were some threads woven through the episode pointing out Kara’s lingering prejudices towards Daxamites in general, and Mon El in particular. Teri Hatcher, as Mon El’s mom Queen Rhea, took good care of her little boy in this regard. Winn’s storyline with Lyra was also used to highlight Kara’s arrogance and inflexibility. Given how long I’ve been calling out Kara for those traits, it was a very satisfying episode in that way.

Kara and Mon El start the episode enjoying Kara’s funemployment with a Netflix and junk food binge. Mon El suggests that they watch one of those movies where people just break out into song out of nowhere. Kara asks if he means a musical, and suggests Funny Face, gushing about the whole idea for a few minutes. Chris Wood is visibly holding back laughter while she gushes. Then they confess how happy they are with each other to each other and are generally perfect and cute and adorable and in love.

END_OF_DOCUMENT_TOKEN_TO_BE_REPLACED 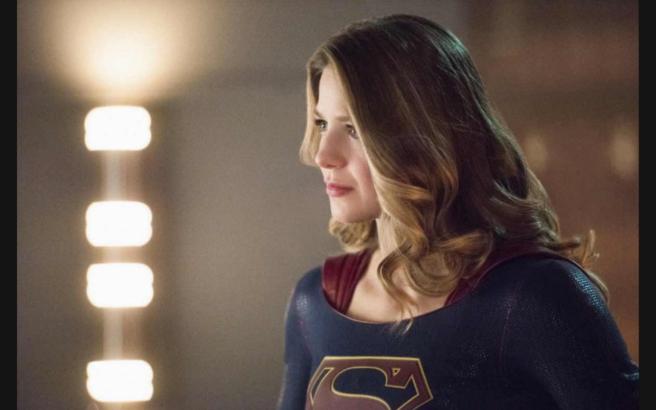 This week, Alex is continues to be hung up on her father’s betrayal, and takes matters into her own hands. The episode’s parallels with our current political situation are obvious, but the show is confused in its own sense of right and wrong.

A seemingly average family is traveling through the rural countryside, with the parents embarrassingly singing along to Bruno Mars, when they are pulled over by a police officer. He doesn’t ask to see the driver’s license or registration, which should be their first clue that something is off. Instead, he tells them they have a broken taillight, which he’ll help them fix with special reflective tape. The dad gets out of the car and a scary black van suddenly pulls up. The whole family is cuffed and dragged into the van. They’ve all revealed themselves as aliens while they were being captured. Beware police officers who don’t follow procedure.

END_OF_DOCUMENT_TOKEN_TO_BE_REPLACED 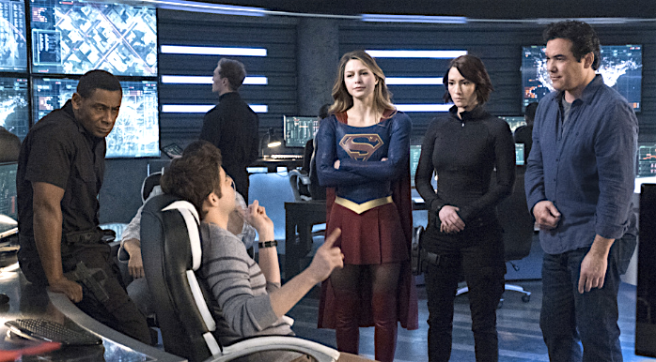 Supergirl and Mon El spent the night together, leaving us with no doubt that Kara has been devirginized by the show. This doesn’t seem to have been her first time in-universe, because you’d think a romantic like Kara would make a bigger deal of it, but possibly it’s the first time she didn’t have to hold very, very still.

Mon El wakes up alone in Kara’s bed and wonders for a moment if he did something wrong, but then his natural cocky optimism returns, and he wonders if it was that good? As he gets up and moves around the apartment, we learn from the TV news that it must’ve been that good, maybe even better. Kara’s already prevented 5 armed robberies, taken over for a tugboat working in the harbor and delivered puppies! Mon El turned her world up to 11! Mon El is a hero! All of Kara’s early morning heroing happened because of him! You don’t deliver puppies for anything less than spectacular.

END_OF_DOCUMENT_TOKEN_TO_BE_REPLACED 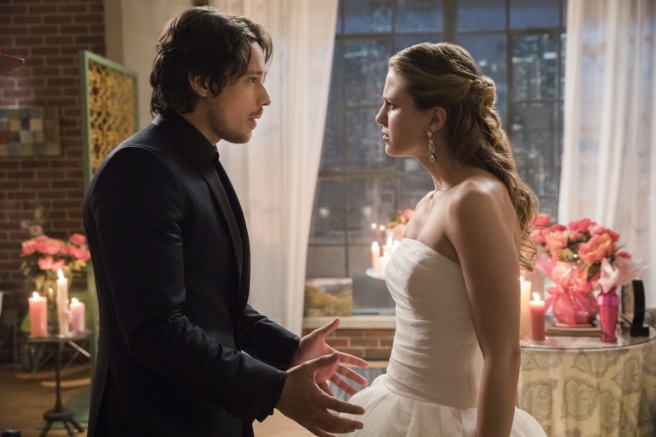 We pick up right where we left off last week, with Mr Mxyzptlk proposing marriage to Kara, professing his undying love, and then throwing out one liners at the speed of light. He sings a snippet of A Whole New World, from Disney’s Aladdin, which is hilarious because the actor, Peter Gadiot, played the genie on Once Upon a Time in Wonderland.

Mon El interrupts Mxy’s monologue, but is quickly dispensed with. After a few well-placed insults, he’s sent off to the DEO in his underwear. I don’t think being without his clothes bothers Mon El in general as much as Mxyzptlk thinks it should.

With Mon El taken care of, Mxyzptlk continues his campaign to get Kara to accept his proposal, while also answering her questions as she tries to figure out what the heck is going on. Somewhere in the midst of wedding dresses, violin serenades, flowers, and candles, he lists the rules of engagement: He’s all-seeing and all-powerful, but he can’t make her marry him, fall in love with him, stop her from killing herself, or make her drink orange juice. Mxy vows to woo her until she falls in love with him, since he’s chosen her to be his mate. With that, he snaps his fingers and disappears again.

END_OF_DOCUMENT_TOKEN_TO_BE_REPLACED 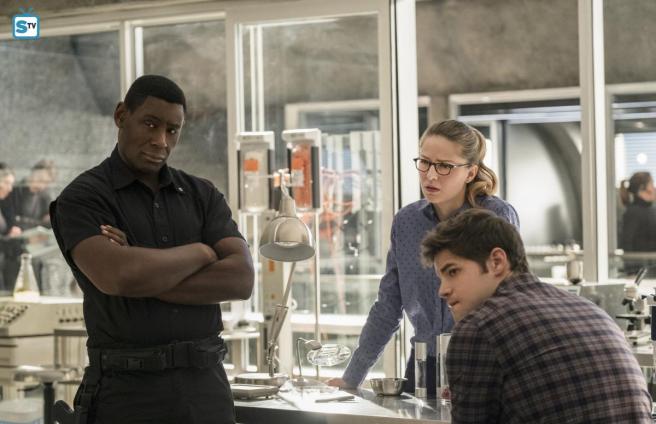 This week is all about the rivalries, on camera and off, between friends, lovers, and family. Lillian Luthor, mommy from hell, set up a rivalry between Lex and Lena from the moment they met that reflected her rivalries with both her own husband and Lena’s mother, and she’s still all about competition. The Supergirl crowd’s rivalries are much more accidental or unconscious, but they are still there. James, in particular, needs to take a good look at his motivations. Lex was his rival for Clarke’s affections, and now Lena is his rival for Kara’s. That’s enough to make James dismissive of the idea that Lena could be any different from the rest of her family.

We open on Lillian teaching Lex Luthor the finer points of chess. Lionel Luthor brings 4 year old Lena into the room, having just adopted her. Llillian makes noises about not having been completely on board with the adoption, but comes around when she sees Lex and Lena interact. Nothing like a little sibling rivalry to sharpen the competitive instinct.

END_OF_DOCUMENT_TOKEN_TO_BE_REPLACED 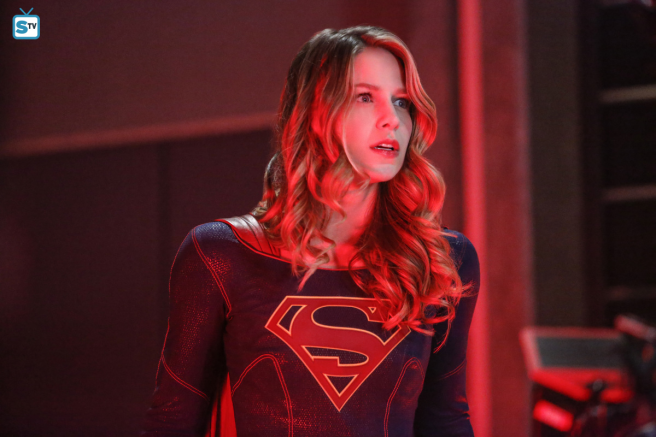 Okay, has everyone who watches Jane the Virgin had enough time to process this week’s events? Are we ready to talk about Supergirl? The Metawitches household needed a few minutes to get back on track.

It’s another tough episode for Kara, emotionally. She’s still on a bit of an ego trip, which she’s using to avoid her real feelings, and the people who make her feel them. The show is finally starting to dig a little deeper into her issues and past. Childhood trauma is something the Berlantiverse loves to explore. They do it fairly well, addressing it in bits and pieces over time. I’m looking forward to seeing what they do with Kara’s past, and how they relate it to her personality, if they take it further than they did tonight. The Flash has brought up some fascinating aspects of Barry Allen’s character, especially in Season 1.

END_OF_DOCUMENT_TOKEN_TO_BE_REPLACED 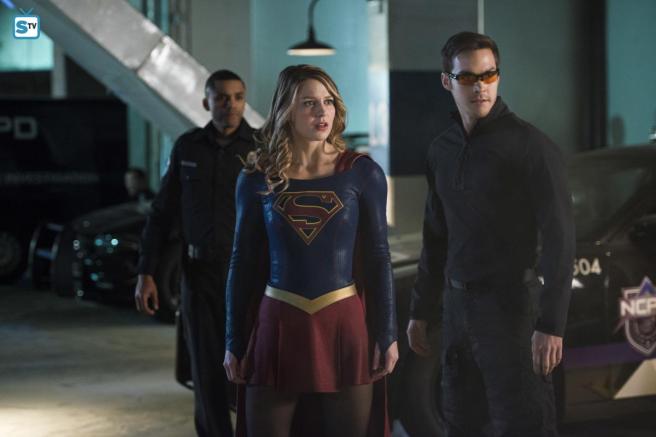 Kara does a lot of emoting this week. She has lots of opinions and feelings about how the people around her and the world in general should behave, and no one will listen to her, gosh darn it all to heck. You’d think that everyone would bow down to her superior wisdom and strength, what with her being an alien superhero who’s so strong that she’s nearly a goddess on earth, but the fools all insist on making their own decisions. And they aren’t even sorry about it. Except for Mon El, who does wish that he was better at following orders, but, let’s face it, he’s one of those people who’s never going to stop making sure she’s okay and only protect the civvies. Pretty sure he can learn to multitask though, if Kara can learn to lighten up.

Kara needs another trip to Earth-1 to reacquaint herself with Oliver Queen, Sara Lance, and Mick Rory. The whole idea that humans can’t be dangerous and are unable to protect themselves was ludicrous. Look at Alex. Kara just didn’t want to admit that she was worried about friends and being overprotective.

END_OF_DOCUMENT_TOKEN_TO_BE_REPLACED 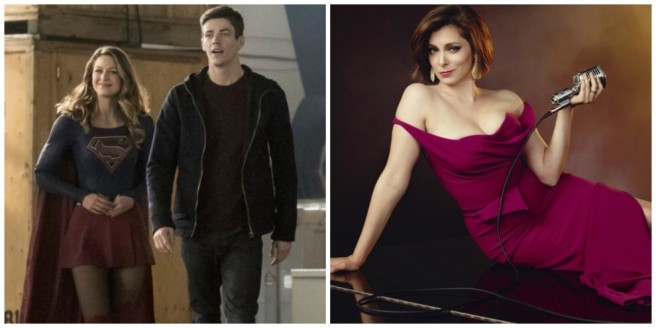 This crossover just keeps getting better and better. They’re already bringing together some of the best cast members from the four CW Berlantiverse shows and allowing these triple and quadruple threats to sing (and, dare we hope, dance? Some of them are amazing dancers, too. Go watch Grant Gustin’s Glee performances again. And Darren Criss can keep up.) Now they’re adding in original songs written by Rachel Bloom, of Crazy Ex-Girlfriend, and Benj Pasek and Justin Paul, Broadway darlings who wrote Dear Evan Hansen, Dogfight, and A Christmas Story, and who have now moved on to Hollywood to write the lyrics for Oscar nominated song City of Stars from La La Land. Can Pasek and Paul go for their EGOT all in one year?