The season finale of The Rain season 2 pays off the concepts the show has played with all season, while also providing a satisfying mirror image to the season 1 finale. As of this writing, June 1st, 2019, the Rain isn’t renewed for season 3, so I hope it gets the chance to finish its story. The path forward is both obvious and wide open, which tells you the writers are doing something right.

This episode continues with the themes of family, responsibility, revenge, romantic love and death. Sarah and Rasmus play out their Romeo and Juliet scenario, while Fie tries to build a stable family for her baby. Simone and Martin struggle to balance their relationship with their responsibilities toward the rest of the group. Patrick takes a giant step forward in his maturity level, while Jean takes a step backward. He’s reacting to losing Lea, so his actions are understandable, but still uncalled for.

Kira joins the group after saving Martin and Patrick’s lives, but it’s not clear yet whether she’s a permanent or temporary member. She suffered so much trauma and betrayal that she’s forgotten how to trust and be trustworthy. She’d be an asset to the group, if she could be open to caring about them.

END_OF_DOCUMENT_TOKEN_TO_BE_REPLACED

After episode 4 of this season of The Rain focused on relationships and doomed love, episode 5 goes full on scifi horror. We thought the survivors were living in a post-apocalyptic world in season 1, but it turns out that the initial plague was just a little prelude to the main event. This episode, Keep It Together, finally shows just how badly everything is falling apart.

The black goo is not only spreading to wider areas of the quarantine zone, it’s now bubbling and smoking on it’s own. It’s consuming everything in its path, including people, at a rapid pace. We’ve known that it’s sentient, but now it’s battling to control Rasmus’ mind.

By the time Simone, Fie, Rasmus and Sarah return from their trip to Bakken, the Apollon soldiers who infiltrated the base are dead. Due to over exerting herself, Sarah has developed a fever along with a flare up of her illness, so Fie takes to her bed. She suggests that Rasmus rest as well, since they don’t know what the cure will do to him. Simone is confident that it will make him better.

END_OF_DOCUMENT_TOKEN_TO_BE_REPLACED

Episode 4 of The Rain sends the characters off on another road trip, this time to Bakken, a Danish amusement park. But, this is the minipocalypse, so it’s not all fun and games. Klaus escapes from episode 2 and wants revenge for what happened to Johanne. Rasmus manages to frost the forest with black viral goo, like the angel of death that he is. And Sarah has plans for a perfect day out, with a very specific ending.

The episode picks up where it left off, with Sarah and Rasmus following a dry creek bed away from the base. Sarah tells Rasmus that they’re headed to Bakken, the theme park,  because Jakob always promised he’d take her there when she got better.

They’ve both been shut ins for most of their lives, so any dream that involved leaving the house/bunker/base was unlikely to come true. They developed different strategies for dealing with that. Rasmus went with dreaming big dreams that probably wouldn’t come true even if he was out in the world, which gave him something to fantasize about and allowed him to avoid extra disappointment. Sarah went with practical, low key dreams that had a chance of coming true, which gave her something to look forward to and work toward.

END_OF_DOCUMENT_TOKEN_TO_BE_REPLACED

Episode 3 of The Rain, titled Stay in Control, opens with Rasmus testing out his new power to release the virus at will. He successfully sends out black viral smoke and then stops it, staying calm the entire time. Every time he’s released the virus in the past, it’s been because he was emotional and out of control.

After the opening theme, Rasmus stands in the doorway of his room and stares at Fie as she works on the cure in the lab. It’s not creepy at all.

We learn about Fie’s background in this episode. Right now, she’s remembering that time in graduate school when she went to a bar with her boyfriend and did shots all night. Urban legend says she did 30 shots, but she denies it later. She was a star student and scientist, which made all of the mediocre mean girl scientists jealous. How dare she be good looking, smart, have a boyfriend and know how to party?

END_OF_DOCUMENT_TOKEN_TO_BE_REPLACED

Episode 2, The Truth Hurts, begins moments after the end of episode 1. Simone has just discovered Rasmus lying unconscious in the lab at the rebel facility. He’s surrounded by the bodies of the scientists who were supposed to cure him and create a vaccine. Despite the fact that he manifested black veins all over, black viral goo instead of blood and poured out a cloud of black viral smoke only moments before, now Rasmus looks perfectly healthy, with his usual smooth white skin.

Simone pounds on the glass between the observation room and the lab, trying to get a response from Rasmus. After a minute, his finger twitches, then he sits up. Simone wastes no time in creating an alibi for him. She tells him to go to the backroom before anyone else can get there. The alarm is still blaring. Rasmus asks if he killed the others. Simone makes up a quick story. She tells him to say that they dropped a sample and got infected. Rasmus doesn’t remember what happened, but he knows it wasn’t that, and tries to argue with her.

Martin and Fie rush into the observation room. Fie turns off the alarm and tries to take in the loss of almost everyone she had left, including her boyfriend, Jakob. Before either can speak, Simone blurts out that Jakob dropped a sample and got infected, then he infected the rest. Before she could do anything, they all just died.

END_OF_DOCUMENT_TOKEN_TO_BE_REPLACED

It’s time to journey back to Scandinavia for season 2 of The Rain, Netflix International’s pocket apocalypse series in which rainwater contaminated by a man-made plague virus has killed almost everyone in Denmark. That country, and possibly parts of the countries it borders, have been closed off in a quarantine zone, while the company which created the virus, Apollon, tries to find the cure. The quarantine zone is a post-apocalyptical hellscape, while the rest of the world continues on as if nothing has happened.

Before the end of season 1, our intrepid gang of survivors, Simone, Rasmus, Martin, Lea, Patrick and Jean, discover that, after 6 years, the rain is no longer toxic. But, as was shown in that other famous viral plague series, 28 Days/Weeks Later, viruses have a way of mutating and spreading when they get a sequel. This was set up at the end of season 1, when Simone and the Scooby gang brought Rasmus, the still-infected patient zero, to their father Frederick’s company, Apollon, on the edge of the quarantine zone.

They aren’t at the Apollon compound long before viewers are shown that Frederick’s partner at Apollon, Sten, evil scientist and CEO of the company, intends to use the virus to hold the world hostage. He needs Rasmus alive and still infected in order to enact his plan.

END_OF_DOCUMENT_TOKEN_TO_BE_REPLACED

At the start of the episode, Thomas drives the survivors toward the grounds of the Apollon headquarters. The 100 foot high wall isolating the quarantine zone can be seen in the distance as well.

Simone remembers when her father charged her with taking care of Rasmus. He told her that Rasmus was the key to it all. In the present, she tries to put her hand on Rasmus’ shoulder in solidarity, but he cringes forward to shake her hand off.

END_OF_DOCUMENT_TOKEN_TO_BE_REPLACED 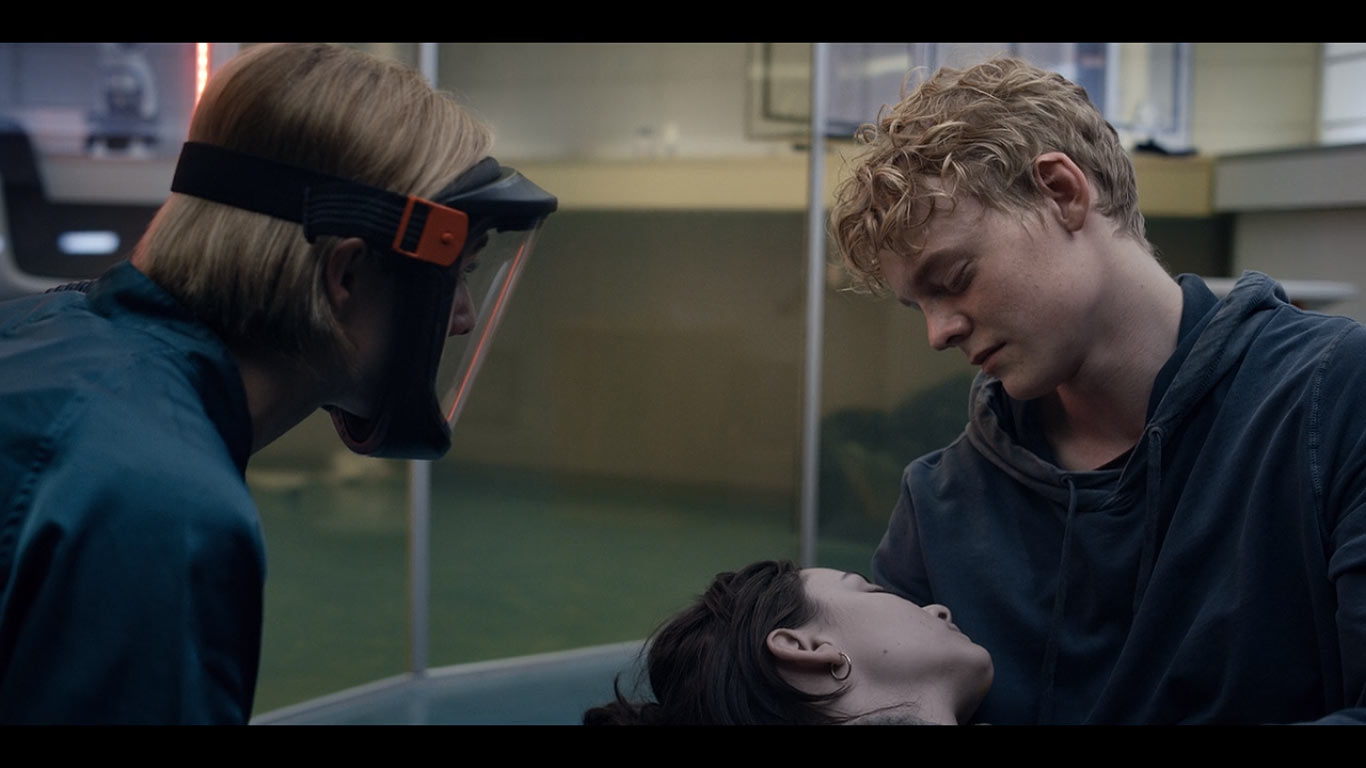