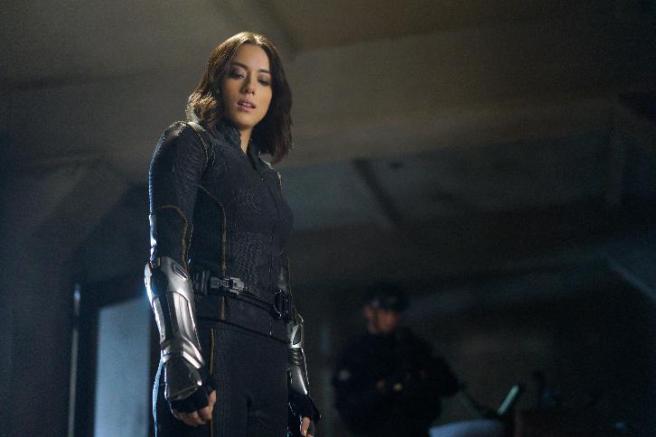 Oh look, now that we have a shiny new Superior, Agents of Shield has Dropped a Fridge on Ellen Nadeer. No need to pay that actress any more, or give the character an actual storyline to write her off. Just, BOOM, disposable female character. And a promotion for the less interesting white male character played by John Piper Ferguson. We definitely haven’t explored enhanced men who play with fire before. Not even ones who are  inhuman and turn on their own kind to work for the Watchdogs.

Radciffe is emerging from a visit to Melinda May’s virtual prison world. He’s thrilled that it’s so endless and realistic. It’s keeping May happy and occupied, which meets Radcliffe’s twisted moral standards.

Ivanov has spent the night reading the Darkhold. He doesn’t seem to have been affected by it, which gives us a sense of how dark his mind was already. The Darkhold told Ivanov that Radcliffe was the one who could make his dreams come true. They will wipe out the inhumans together. First, they need an inhuman to dangle in front of SHIELD. Radcliffe has created purified terigenesis crystals that are harmless to regular humans but still stimulate terrigenesis in inhumans.

Fitz is working on an LMD detector, but it’s still too sensitive. It goes off when an agent brings him Jeffrey Mace’s superhero suit. Or the base is full of LMDs. Just sayin’.

Simmons and Mace are doing testing on his supersoldier serum and its effects. It turns out that it’s potentially lethal. Sooner or later it will cause cardiac arrest. Using it is like playing Russian roulette. Mace doesn’t want to hear this. He’d finally found his place at SHIELD, and a way to help and be a hero. Now he’s left with nothing, again. Fitz has modified his suit so that he has a serum injector right on his belt, though!

Daisy is hard at work moving inhumans to secret locations. She asks Mace to make sure that the UN backs them up on keeping the new locations a tightly held secret, so that they don’t leak to the Watchdogs. See, he does still have an important role, it’s just not macho and manly enough for him. It’s just as protective as anything Captain America (who Jemma just name-checked) does, and very similar to his fight for Wanda and Bucky’s rights in Civil War. But a policy fight to keep people safe is boring compared to a physical fight, even when you are the director of SHIELD and supposed to be a grown up. This is why I love my Stevie. He fought for Bucky’s right to due process, and Wanda’s right to be free from internment. That gets forgotten and shoved aside in all of the other excitement of Civil War, but it’s there, and it’s why he doesn’t sign the Accords.

Coulson gives Mace a pep talk. He felt the same way when he stated working with the Avengers. He counsels Mace to avoid getting an Asgardian spear through the chest while Mace is figuring out where he fits in. Uh oh. Foreshadowing.

Coulson and Mack are in Spain, on the hunt for the woman Radcliffe used as his inspiration for Aida. They find her, but it turns out that she’s dying from an untreatable brain tumor. Her name is Agnes. She and Radcliffe were involved.  He couldn’t help with her illness, or deal with his sense of failure, so he left her. She wants to be left alone now to live out what little time she has left in peace.

Coulson wants to force Agnes into helping them find May, but Mack is against it. He thinks she deserves to be left alone, but he also thinks that Coulson should give up the search for Melinda, which is really odd. What about No Man Left behind? Doesn’t May deserve some effort here? They’ve had zero indication that she’s dead. Is this a hint that Mack’s the other LMD, or is it because he’s trying to get past the loss of his baby daughter, and thinks everyone else’s situation is hopeless, too? Coulson won’t give up, in any case, that’s not what he and May do.

Shockley brings one of the purified terigenesis crystals to Senator Nadeer’s office. He smashes it into a powder to see if she carries the inhuman gene like her brother did. She doesn’t transform, but Shockley develops a husk. Nadeer is laughing at Shockley having the misfortune of getting caught in his own web, when Shockley suddenly explodes, destroying everything in the office. Nadeer is confirmed dead on news reports, though we don’t see a body. She could have already gone through terrigenesis and used her powers to escape the explosion. But she seemed genuinely relieved that the crystal didn’t affect her. It’s more likely that the character was fridged.

The SHIELD team decides to investigate the explosion. They examine what’s left of Nadeer’s office, and narrow down the bombing suspects to Shockley.

Shockley has recovered from the explosion and makes his way to one of the Watchdogs’ hideouts. Ivanov is waiting for him. Ivanov is Not Happy about Nadeer’s death. Shockley blames the explosion on Nadeer, and reaffirms his loyalty to The Superior. Ivanov and Radcliffe decide to leave the country to escape the increased scrutiny that’s sure to follow Nadeer’s death. They leave Shockley behind to take the fall with SHIELD. He promises to take SHIELD down with him.

Daisy captures Shockley. They take him to the Zephyr. While Daisy questions him, Fitz and Simmons continue to analyze the evidence from the bomb site. They realize that they are seeing the remains of a terigenesis husk and it must be Shockley’s. Shockley refuses to talk to anyone but Mace, who arrives just as Fitz and Simmons discover Shockley’s the bomb. The team maneuver Shockley into the safe room pod, and eject it just as he explodes.

Coulson approaches Agnes again. He tells her the truth about why he needs her help. After hearing Melinda’s story, Agnes is ready to do whatever she can to help Coulson get to Radcliffe.

Radcliffe receives a message from a post-humanist subgroup, marked private. He gets excited, and makes plans to leave immediately. He wants the framework perfected while he’s gone. Then he shows Aida that she was modelled after a living person, who now needs his help. Aida is not thrilled that she’s a copy.

Agnes waits for Radcliffe to meet her in a restaurant, while Coulson and Mack wait in the wings to capture him. Radcliffe sends Agnes a telephone, and then a car, instead. He tells her that he’s found a way to beat death for her. Agnes can live a full life in his framework. He already has a test subject thriving in it. She gets in the car with him and rides away. Coulson and Mack lose them, and their lead on May’s location.

Mace tries to make the whole “Shockley exploding mid-flight” incident about him, though I’m not clear how a supersoldier could have stopped Shockley from using his power. Thank goodness Fitz and Simmons are happy being scientists, because they’ve already figured out how Shockley’s exploding power works (he turns into a flammable gas), realized that he’s probably already reassembled his body on the ground, and assigned Daisy the task of figuring out how to suppress Shockley’s explosive process with her own powers. Mace points out that Shockley is now the perfect weapon, an undetectable suicide bomber who can walk away. The Kree would be so proud.

Shockley’s body reassembles itself molecule by molecule down on the ground in the middle of the desert. He steals a car and clothes, then makes his way to a motel with a phone. He calls Ivanov to confess that he is now an inhuman and will continue with their plan to destroy SHIELD and the rest of the inhumans. Then Shockley blows up the motel.

The SHIELD team tracks him down and Daisy forces him to explode over and over in order to wear him out. It turns out that the Watchdogs were using him as bait. They arrive to try to capture Daisy and Mace. Mace uses his serum to fight the Watchdogs while the rest of SHIELD escapes and captures Shockley in his gaseous state to take with them. Ivanov captures Mace, who he still thinks is an inhuman.

Radcliffe takes Agnes to the submarine. Aida helps upload her into the framework before she dies. Aida takes Agnes’ necklace from her body and puts it on.

Coulson understands why Agnes chose to go with Radcliffe. Mack, still focussing on the negative, says he understands how hard it is to let go. Coulson says he’s not letting go. He knows that Radcliffe was talking about May when he mentioned the subject who is thriving in the framework. She’s alive. 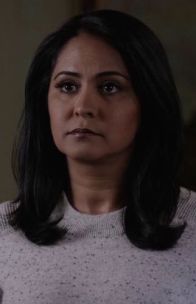 And, just like that, we fridge the woman of color in favor of the white man. Now that The Superior, who just happens to be white and male, has arrived, Senator Nadeer is no longer necessary. The MCU in a nutshell. 😡 😡  I’m sure the writers considered all of the options, like I did, and this was the only one that would work. Just like the film division barely acknowledges the existence of female or non white directors and stars that aren’t named Scarlett Johansson or Anthony Mackie.

There is no reason why The Superior couldn’t be a rich, athletic Russian woman with a submarine fetish and a hatred of inhumans. Or a rich Japanese woman, South African woman, Brazilian woman, or Indian woman. Or a man from any of those countries, if it has to be a man, so that male viewers aren’t threatened by seeing a woman ordering men around and winning physical fights, God forbid.

Hmm, I wonder if they considered the homoerotic subtext of having all of those burly men running around in a submarine? Or the creepiness of having the only women on board be dead, unconscious, or robots? I’m sure the men all took a vow of celibacy. Happiness is a warm gun.

Radcliffe is turning into Gollum with the Darkhold, as Billy Koenig already suggested. How long before he starts murdering everyone else who gets near it, like Uncle Eli did? Or having Aida the murderbot do it to prove her true love?

I hope Mack isn’t going to make me go through my whole, long No Body=No Death speech and invoke Bucky and Steve’s names again. I’ll walk you right over to the Wall of Valor and start pointing at names, if I have to, Mack. You’re sitting next to one of them.

Which is sort of making me wonder if we’re gearing up for a baby-swapping storyline involving Mack’s supposedly dead baby?