This should be obvious, but just in case, there are spoilers for the Broadway-bound Frozen stage musical ahead.

Just a few quick thoughts tonight, and some photos. Not of the show itself, of course. Disney would take this site down faster than I can type this sentence. Same for audio, only they’d threaten me even more. There should be professional photos available now that the previews have started, so I’ll post those when I find them.

The show was, as advertised, longer than the movie, with new songs and more depth added to some of the characters. Things were changed from the movie, such as the order of some events and details of how some things happen, but the story is still largely the same. The changes had mixed success, in my opinion.

The cast was excellent. They were all well cast, did great work, and had great chemistry together. I’m trying to think of someone to single out as being especially amazing, but they were all really, really good. Caissie Levy’s Let It Go brought down the house at the end of act one. I think Greg Hildreth might be Josh Gad’s younger clone. Olivia Phillips was delightful as Bulda, Kristoff’s adoptive mother from the Hidden People, who have replaced the Trolls. Tim Hughes was amazing as Pabbie, but I really wanted Bulda to be the narrator instead of him. It was hard to take your eyes off of Patti Murin and Jelani Alladin whenever they were onstage, especially together. They were definitely the fan favorites with the kids, in addition to Olaf (obviously). John Riddle had me convinced that they’d changed Hans into a good guy right up until the moment he turned on Anna as she was dying.*

The Sven costume is very cool, and very hard to explain. I can’t figure where the guy is, and where there are stilts/puppet parts. The head is definitely a puppet head. Part of the front legs are probably short stilts. And Andrew Pirozzi is probably on all fours when he’s on stage. But Sven comes off as more real than I would have thought possible.

The ice and snow effects are fairly well done. The concepts are good, but I think they need to punch up their execution more. There were many times that if you didn’t already know where to look because you’d seen the movie, you would miss the ice effect because it was so small and fast. You also wouldn’t understand what the fuss was about if you hadn’t seen the bigger, more dangerous movie version. After seeing what can be done with lights in shows like the Curious Incident of the Dog in the Night and Les Miserables, there’s no excuse for a company like Disney to cheap out on the effects.

I liked most of the costumes. Some were very creative. Olaf is a snowman puppet that the actor walks in front of him, similar to many of the Lion King puppets. The trolls have become the Hidden People, who are supposed to be ancient indigenous Scandinavians from folk tales. They dress in animal skins and have long, furry tails. Putting tails on indigenous people seems problematic to me, especially when played by people of color, especially this week. The producers were kind of tone-deaf on that one.

Elsa only wears her bad girl evening gown for Let It Go and her confrontation with Anna in the ice castle, then changes to a white shift/nightgown and bare feet for the rest of the show (almost all of act two). Her character is made more passive to go with the more virginal look. Both were a major let down. This story was about a powerful woman learning to use and accept her own power, and two sisters whose true love saved them. Now the love story between Anna and Kristoff gets more focus, Hans has become more prominent, and Elsa doesn’t get to speak for herself most of the time. Pabbie voices Elsa’s situation and thoughts through much of the show, and Hans controls her in the second act. Elsa must choose between using her power, which makes her a monster in her own and everyone else’s eyes, or remaining passive but seen as good. Unlike the movie, she chooses not to use her power. It’s a subtle, frustrating change in the message of the show. Though I didn’t find the wardrobe change to be subtle at all. In the blink of an eye, she went from glamorous and powerful witch in control of her own destiny to passive virginal princess in white rags and bare feet who lets men control her fate.

I liked the new songs, for the most part. What Do You Know About Love?, which is a duet between Anna and Kristoff as they climb to Elsa’s ice palace, and True Love, sung by Anna after Hans has abandoned her to die, were my two favorites of the new songs. Metamaiden also liked Elsa’s coronation song, Dangerous to Dream. Many of the “new” songs are reprises of old songs, or new songs that have already been sung once or twice. The orchestra was clearly the Broadway orchestra, and they’re ready for the transfer anytime.

They seem to be expecting the musical numbers to change a lot. There isn’t a song list printed in the program at all. It’s on a loose page so that they can easily switch it up every night.

We see the show again Saturday.

Cover and pages from the program: 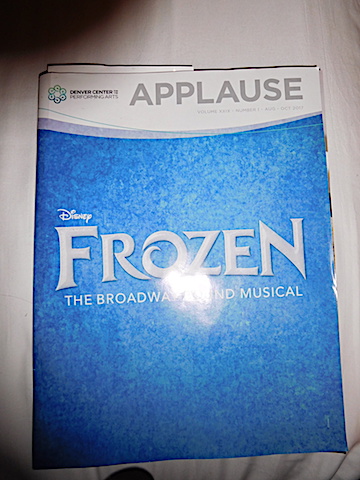 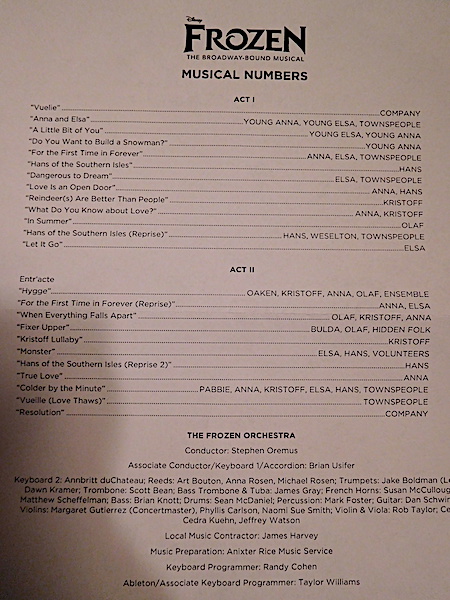 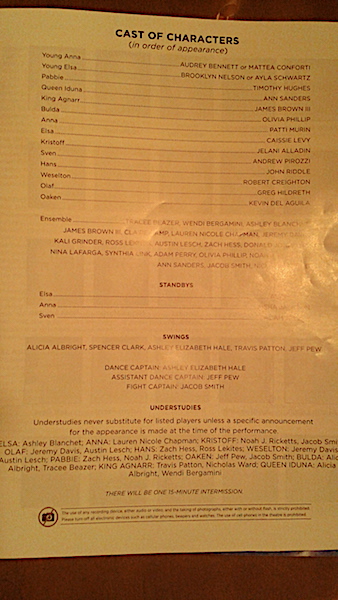 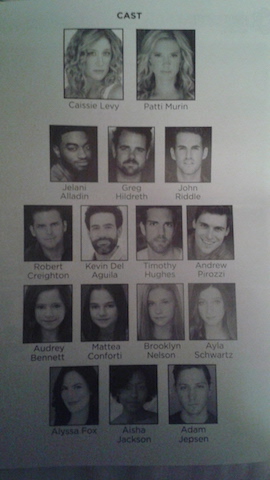 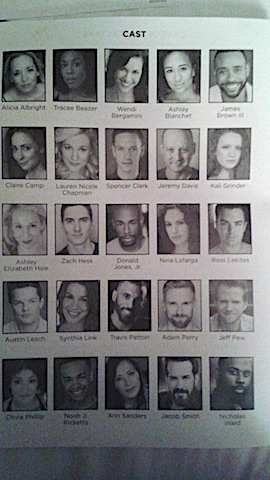 In front of the theatre- a few hours before curtain, and 15 minutes before show time. 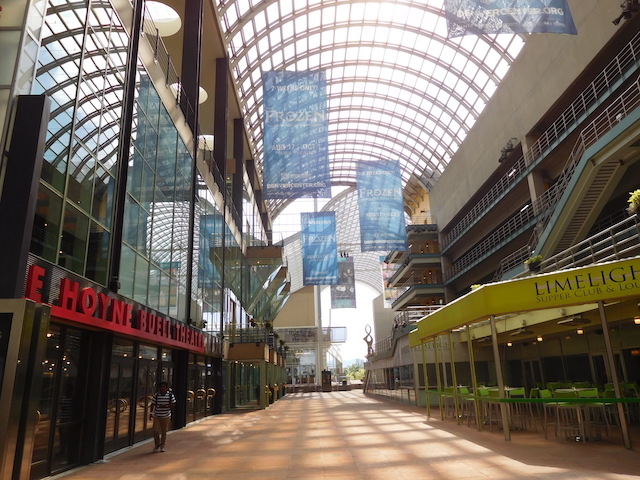 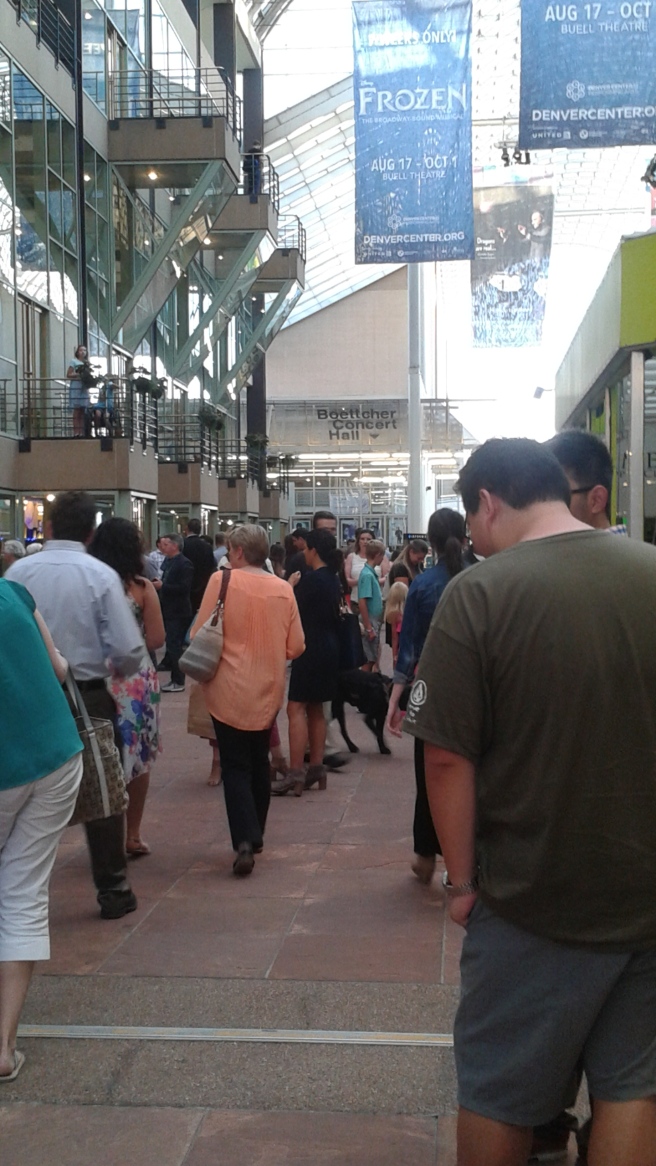 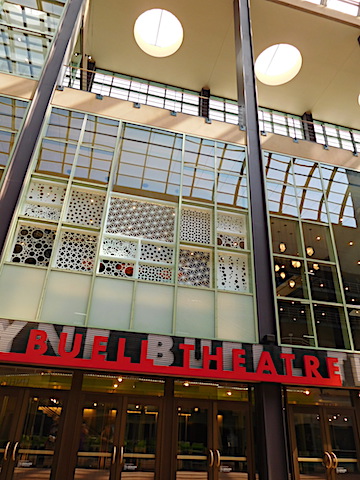 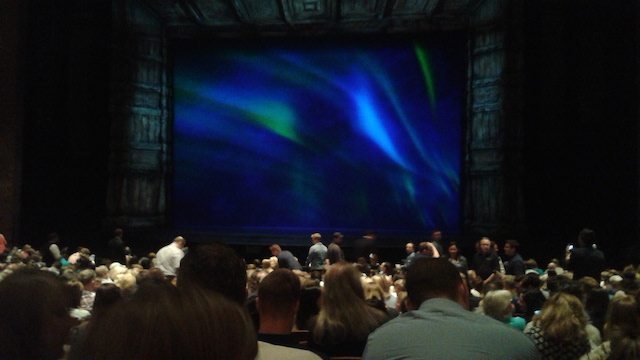 Denver’s mascot, the Big Blue Bear. He’s very tall. The trees that line 14th street all have blue trunks and branches to match the bear. 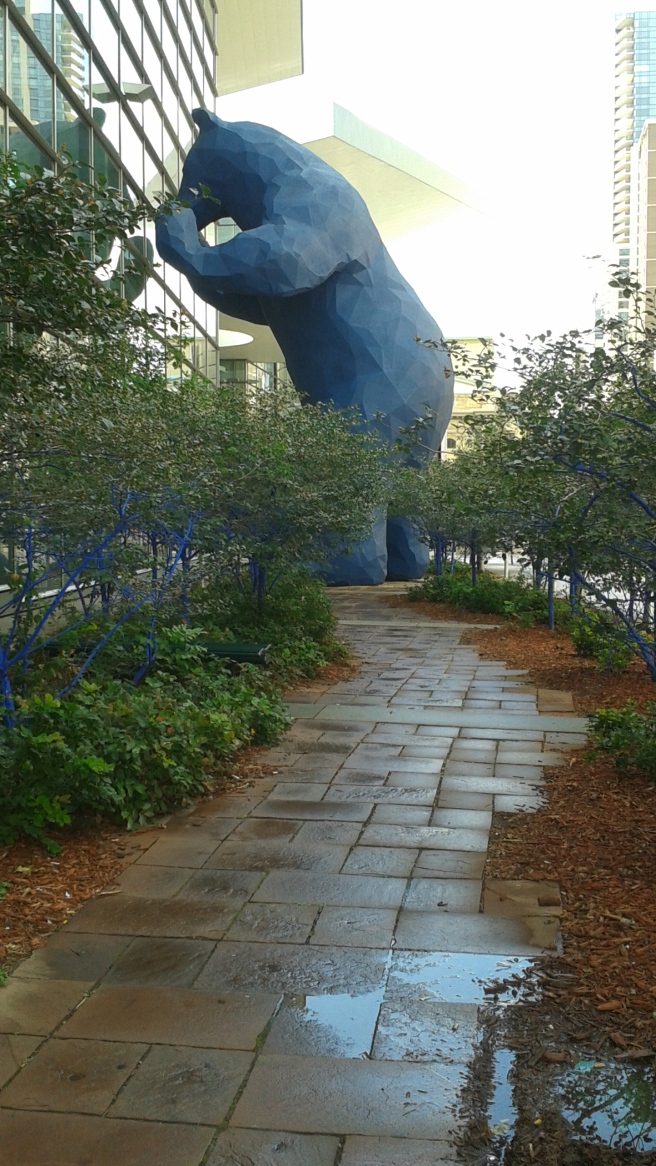 * I will never stop rooting for Hans to see the error of his ways and find true love with Elsa. They’d be an unstoppable power couple, once he had a secure position and could settle down.