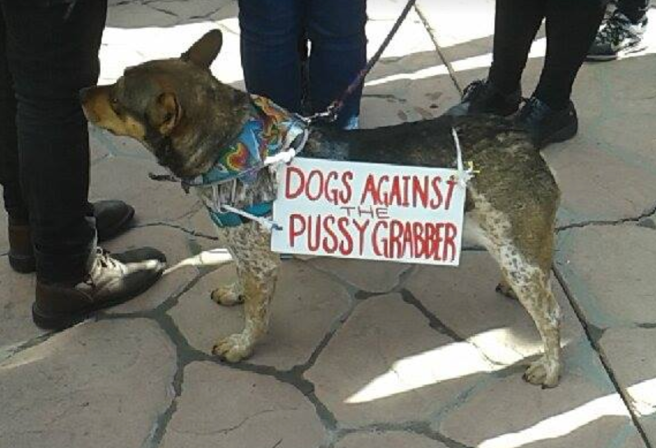 Today (Saturday, January 21,2017), I (Metamaiden) joined millions of others around the world in marching for women’s rights. Though it was freezing for Albuquerque, it was a super fun, inspiring day, and I’m glad I got up a little earlier than I prefer (heheh) to be a part of it.

We arrived at exactly 11 AM, just as the march, which was really more like a rally, was starting. As we were crossing the street to the plaza where the march was being held, an announcer was giving guidelines for how to handle aggressors. Then, as we were starting to make our way into the crowd, the speaker said, “There are some people who don’t think there are this many people in the whole state of New Mexico!” 😏😋👏

In total, it’s estimated that 10,000 people were at the march in Albuquerque.

The speakers talked about standing together, continuing to fight, and not letting today be the end of that fight, but to continue to stand up against injustice. They reminded us that most of our country did not vote for this disgrace. Hillary Clinton got 2.8 million more votes than Donald Trump, and with 65,844,610 votes in total, she received more votes than any other presidential candidate in history, with the single exception of Barack Obama. One of the speakers strongly encouraged us to go to our city council meetings and make our voices heard. She asked us, “You’re here today, but what are you going to do tomorrow? What are you going to do Monday?” One of the other speakers recited what sounded like a poem that I imagine is titled “When Women Rise,” or “Women, when we rise.” It was about the profoundness of women realizing their power, and how strong they are. I wish I could recite it, but alas, I didn’t record it. Maybe it’s a poem that can be found on the internet? After that, they sang a fun, country-ish song that I think was titled P*ssy Power.

Many of the attendees were wearing bright pink hats with cat ears. I immediately understood the pink, a symbol for femininity, but it took me a disgracefully long time to understand the cat ears. They were p*ssy ears.

It took a while after the march for it to sink in for me, but then I realized that all of the speakers, every single one, was female. Today was truly about the female voice and perspective and rights. And though I couldn’t see any of them (the woes of being short), I knew they were diverse women as well: one of the speakers was African American, and another told us she was a Pueblo Native, if I remember her words correctly. Some of the things the speakers said were translated into Spanish, and I caught a few glimpses of a woman translating the speeches into ASL.

I was very heartened to see a few signs with words that have often been said by one of my personal queens, Hillary Clinton. One of them said “When they go low, we go high.”

The signs were a joy to see. There was one that was a play on the Obama “hope” image from 2008 (now I have emotions). It was in the same style, but an image of Tr*mp, with the word “nope.” 👏👏👏👏👏 One of my favorites said “P*ssy Will Grab Back,” except the word p*ssy was replaced with an image of a cat. Another genius sign said “Viva La Vulva.” One had a picture of a naked female body with the nipples and p*ssy crossed out, with the words “Respect Your Maker.” My possible favorite was “Nasty Women Unite,” a phrase I myself thought of and wrote on my university’s sidewalk on my first day on campus post-election.

We also came across this gem:

I call it the Tr*mp Piñata.

This has nothing to do with women, but another thing I loved about the march was all of the DOGS. I pet so many today. A blue heeler (I think), pictured above, an old golden retriever mix, a big, old white one, a teeny tiny one (I think her owner said she was a mini beagle) whose name was Penny, one who was very shy and had just been adopted but had a friendly energy, a great dane who was so slobbery he had a bandana for people to wipe his saliva off on (I got a big glop on me!), and a smaller dog who belonged to the same family, possibly a boxer.. And I saw many more that I didn’t get to pet.

Oh, and the other side of the lovely feminist dog above:

The most intriguing dog, however, was so because she (I don’t know the gender, but as this was a women’s march, I’ll reverse the default pronoun) seemed to be very musically talented. As we wandered the plaza, looking at signs, briefly talking to people, and petting dogs, we came into earshot of multiple drums playing a compelling beat together, with a man singing along with them. Then, we heard a dog bark in time with the music! We laughed, assuming it was a fluke. We rounded the corner and saw that there were four drummers, with the dog who had barked standing next to them on a leash. (I think the leash was attached to the drummer she was closest to.) As we watched, joining others gathered around them in a half-circle, the dog barked in sync with the beat AGAIN! Then we realized it wasn’t a fluke the first time, she was either trained to do that or she has a musical sense! She didn’t always fall in time with the music, but she often did. I especially loved it when she was in syncopation with the beat. It added a lovely layer to the music. She continued to bark periodically for the maybe thirty minutes that we watched them.

After a minute of watching them, a young woman with a small pink and white sash that said, if I remember right, “we will rise,” came over to the dog, gave her a quick greeting (they were clearly acquainted), and began to dance. She had beautiful, fluid, sometimes stomping movements. It was wonderful to watch. Then another girl, wearing the same sash, joined her, dancing in a similar way but with her own style, and the two danced together in front of the drummers. They would interact with each other as they danced, not touching but dancing together, and sometimes interact with the dog as they continued dancing. After a few minutes, a third woman joined them. Then another. Slowly, the people on the sidelines began to go from bystanders to fellow dancers. Multiple little girls got involved, one of whom was wearing a Supergirl shirt. As this happened, it began to hail.

I found my heart racing from the energy surrounding me, and moved by the metaphor I took from it. Women dancing, letting their bodies move freely and unashamedly. Not in a particularly sexual way, but not in a particularly non-sexual way, either. Whatever they were, they were. And women of so many ages and colors and shapes and sizes. And right in the middle of this rhythm was a nonhuman animal, joining in as well, as much a part of this moment as the humans. All of us wordlessly joining together to move to the same rhythm. And amongst all this was Mother Earth herself, showering us.

It was a simple yet powerful experience. Women, animals, nature, and music all mean a lot to me, and to experience them all in harmony in that moment was exhilarating. 🌎🐶💃🏽🎶

Since I thought it was so much fun, I’ve included a few videos I took of it. Sorry for the poor quality, my phone isn’t the greatest.

View all posts by Metamaiden

One thought on “P*ssy Grabs Back: Metamaiden’s Story of the Women’s March on Washington (Well, Albuquerque)”