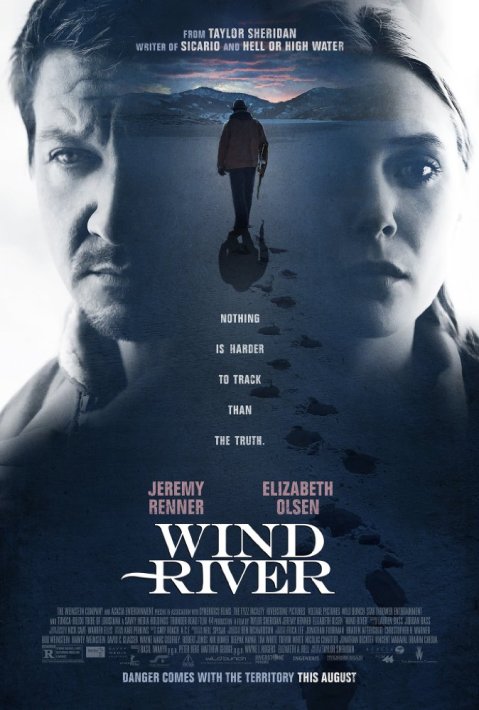 I have very mixed feelings about Wind River. On the one hand, it’s beautifully made, starring a talented group of some of my favorite actors, and tells a compelling story. On the other hand, the story is about the epidemic of sexual assault and violence against Native American women, yet the voices of these women are hardly heard. The story is told from an overwhelmingly male point of view, and the two main characters are white.

Wind River takes place on the Wind River Indian Reservation in Wyoming. Jeremy Renner plays Cory Lambert, a US Fish and Wildlife Service hunter and tracker who works on the reservation. His ex-wife, with whom he has a son, is a Native American from the reservation. They also had a teenage daughter who died mysteriously three years prior to the movie.

As he’s hunting a mountain lion that’s teaching her cubs to hunt livestock, Cory tracks bloody human footprints in the snow to the body of 18 year old Native American woman Natalie Hanson. Natalie was the best friend of Cory’s daughter Emily, so he recognizes the body, and reports her death to the tribal police, headed by Graham Greene as Ben.

Since Natalie was barefoot and showed signs of a violent death, the FBI is called in to investigate. They send in the closest officer to the scene, Jane Banner (Elizabeth Olsen), who happens to be young and inexperienced with homicide investigations and winter weather.

Jane asks Cory to help with the investigation, since he ironically has the most experience with hunting and tracking killers, even if they aren’t usually human predators. Ben, Cory and Jane form an investigative unit for the rest of the film, combining their strengths and helping each other work through their weaknesses to solve the case. They work mainly with the Native Americans on the reservation as potential witnesses, and federal workers from nearby facilities.

Much of the investigative work is done from the back of a snowmobile, with Cory driving Jane around, teaching her to look for tracks and clues. This gives the movie the opportunity to show off its majestic winter setting, with sweeping mountain vistas and close ups of animals in their snowy natural habitat. It’s stark but gorgeous.

The soundtrack uses spare, quiet music with bitter acoustic country and folk leanings to match the tone of the visuals. The volume is kept low, to match the silence of the woods in winter. At times it’s so low that it’s a whisper. The dialogue of the film is often stark and poetic as well, as if the rough lives lived in this harsh environment are always one step away from becoming the lyrics to a sad song.

Sometimes the filmmakers’ inclination toward silence goes a little too far. I had to watch with the closed captioning on in order to get all of the dialogue. Otherwise Cory’s taciturn statements often came out too mumbly for me too understand without stopping and rewinding several times.

The story is told in a straightforward manner, with minimal use of flashbacks. The suspense comes from the inexperience of the investigative team vs the mystery of how dangerous their suspect might be. This is compounded by the isolation of the setting. It’s pointed out to us every few minutes that there’s no back up here. Even an ambulance is an hour away.

The bulk of the storytelling is placed on the three leads, and they carry it well. Jeremy Renner is an understated actor who gives solid performances that highlight the material and support the performances of the rest of the cast. This is another restrained performance that’s filled with emotion and heart. I burst into tears during every scene between him and Gil Birmingham, who plays Natalie’s grieving father.

Elizabeth Olsen finds what could have been a difficult balance between exuding authority as an FBI agent, while also expressing anxiety and uncertainty on her first big case. She’s met with the sexism you’d expect from a group of middle-aged male law enforcement agents when faced with a very young woman who’s supposed to be the expert sent to help them, but she slowly and graciously wins them over without becoming defensive. It’s an impressive feat for the character and the actor.

Graham Greene and John Bernthal each play variations on the stock characters that we grown to know and love them for. Each character has some unexpected twists and moments for the actor to shine. There are several other Native American actors among the supporting cast who are familiar faces, mostly male. They play a variety of roles who flesh out the portrait of life on the reservation.

Life on the reservation if you’re a man, that is. The roles for women in this film are far and few between. When they appear, it’s as a girlfriend, wife or mother, unless they’re a white woman named Elizabeth Olsen.

Natalie’s father has a moving arc showing his grief. Her mother is shown twice, for a few seconds, one of them sleeping. She never speaks. We aren’t even told her thoughts by someone else. We just get the implication of depression, while her father is given subtlety and nuance.

At the end of the film, a card flashes informing the viewer that “While missing person statistics are compiled for every other demographic, none exist for Native American women.” Why then, is the story told from the point of view of the men?

Taylor Sheridan, the writer and director of the film, says that he wanted to bring attention to the injustice of the conditions on the Wind River Reservation, and he does, for the men, and to some extent for the women. But he also perpetuates the problem by telling the story almost exclusively through male (and one white female) voices.

He himself silences the Native American women that others have silenced and abused for so long. Even in flashback, Natalie isn’t allowed to verbally express her rage at the crimes being committed against her. It’s up to the men who cared about her to define her feelings and her struggle. We don’t hear from any women who knew her, or who knew Cory’s daughter Emily, other than to address Cory’s feelings. It’s as if Sheridan has made them part of the statistics he couldn’t find.

Overall, Wind River is a very good movie, with a satisfying story and gorgeous sound and visuals. But, in the end, it’s over reliance on a white stars to bring in box office numbers, and male voices to tell what should be a female Native American-driven story, stops it from being a great movie.

ETA: Despite my reservations about this film, it was robbed in the 2018 Oscar nominations. At the very least it deserved nominations for sound, music and the use of the natural environment in Wyoming (cinematography). The two leads should also have been under consideration for nominations. Gil Birmingham definitely deserved a best supporting actor nod.