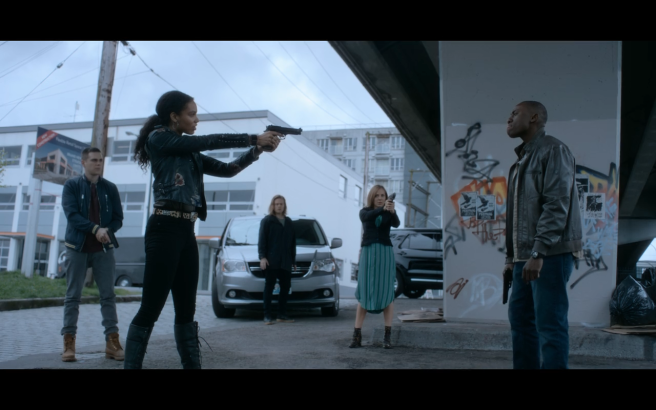 In season 3 of Travelers, Jeff and Carly’s series-long battle finally ends with Jeff being taken over as a Traveler. Later, the Traveler who’s using Jeff as a host, 5416, suggests that the Director only took Jeff because Carly stood her ground during an argument and turned it into a kill or be killed situation, forcing the Director’s hand. In other words, he accuses her of causing Jeff’s death by making the Director choose between allowing both her and Jeff to die, or using Jeff as a host.

During the same conversation, 5416 makes it clear that he knows little about Jeff as a person or his history with Carly. Over the next few episodes, it becomes obvious that his training was lacking in other ways, because the future is getting worse, instead of better. His supposed “calling out” of Carly for causing the Director to take Jeff as a host, when it otherwise wouldn’t have, is based on ignorance, and should be dismissed.

Jeff’s own experiences and actions set him up for the mission that 5416 is sent to perform. Aside from being kidnapped by 001, he’s had full agency over the choices which led to him pointing that gun at Carly when his Time of Death Countdown Clock popped up. He was kidnapped with four other people, and none of them have reacted to the kidnapping by becoming a violent stalker.

That’s what it’s called when someone behaves the way Jeff did toward Carly in the first five episodes of the season. Harassment and stalking. Carly couldn’t do anything about it because he was a police officer and the police were protecting him. This was clearly illustrated to us with the DUI charge.

It was violent criminal acts perpetrated against a woman who had no legal recourse to stop the person who she knew was capable of murder. To blame Carly is to use misogyny to blame the victim of a violent man and an unjust system.

Jeff’s reaction to the kidnapping is virtually indistinguishable from his reaction to anything else in his life. He makes a play for sole custody of the baby, screws it up, and increases his alcohol consumption. This is the unhealthy pattern of an addict, and he was going to continue his downward spiral with or without the kidnapping. He becomes a Traveler because of his own actions, not because anyone drove him to it. It’s misogynist, abusive thinking to suggest otherwise.

The cycle of violence that he was imposing on Carly was going to continue. It is the norm for abusers to blame the victim for their abuse, so it’s not surprising that Jeff blames everything that goes wrong in his life on Carly and becomes hostile and violent toward her. When she doesn’t react the way he imagines the original Carly would have, he tries to kill her and becomes a Traveler.

It’s important to note that the sweet, docile original Carly Shannon he remembers is a fantasy. Original Carly died defending herself from him. She wasn’t passive. She was arguing with him and she was going for weapons in the middle of that raging argument. If the original Carly had the resources and training that 3465 has had, she would have responded to Jeff the same way that 3465 has.

Jeff’s story ends the way it was always destined to, with his death. Once the original Carly Shannon was swapped out for 3465, with her tactician’s training, Jeff was either going to die at her hands, become a Traveler, stop drinking and go through a recovery program, or cause his own death through his drunk and/or violent actions.

We’ve been shown that he was unable to get his addictions to alcohol and violence under control, so a happily ever after was against the odds for him. We’ve seen him have at least two near misses with death, probably more: when he tried to rape Carly and she nearly beat him to death and when he was driving drunk and ran the stop sign.

Having avoided his first TELL, when Carly almost beat him to death after he tried to rape her in S2 Ep11 (Simon), Jeff was already living on borrowed time. The only reason for Philip to be given knowledge of that fight in his update would be because Carly was supposed to kill him, so Philip was given Jeff’s TELL. Philip told us several times in season 3 that he isn’t given foreknowledge of random events in the team’s lives, even traumatic events, and he isn’t given information on the death of anyone who isn’t a host candidate. Carly didn’t suddenly turn Jeff into a host candidate in Season 3 Episode 5, as Traveler 5416/Jeff suggested. Jeff was already a host candidate, and he brought his death on himself, through his own actions.

When Philip saw Jeff and Carly, dead on the ground, before he drove away with Jeff, he was seeing the current TELL(s) he already knew about. If you watch the scene closely, Philip stays in the back and doesn’t draw his gun to protect his good friend Carly. He knows that a Traveler is coming, and that he shouldn’t interfere with the process.

Carly’s self control stopped her own death. She knew that Jeff was a host candidate because of Philip’s actions when he stopped her from killing Jeff in season 2. She knew from Jeff’s actions throughout the series that he wasn’t going to stop until one or both of them were dead. She controlled her own anger, but kept Jeff talking until they reached the point in the timeline when Jeff’s death was unavoidable. Then the Director took him as a host.

The Director chose not to use Jeff as a host in season 2, even though it probably could have justified taking him during Carly’s beating. By Season 3 Episode 5, Jeff has been kidnapped by 001, knows about the Travelers, and has been loudly and publicly harassing Carly about the Travelers. He is now perfectly situated for the mission the Director assigns to Traveler 5416.

Before he’s taken as a host, Jeff hates Travelers. He’s perfectly positioned to be recruited by the Faction, which is what the Director wants.* He’s already been in contact with the anti-Traveler support group leader, and the support group turns out to be a front for the Faction. Just as the Director planned, 5416 is then able to use Jeff’s contacts to investigate whether the Faction and Vincent are working together and to find the missing archivist.

All on his own, Jeff has lost his relationship, his job and his son. His Protocol 5 situation is ideal for a Traveler.

Jeff chooses an isolated time and place for a confrontation with Carly, which allows the Director to swap him out with 5416 and finally let 3465 do her job, unencumbered by his violence. Though, as it turns out, preparing Jeff for 5416’s mission was part of her mission. She continues that mission after the identity swap by helping 5416 learn how to fake being Jeff Conniker.

To suggest otherwise ignores the complexity of this amazing show, and abusively blames the victim of a violent alcoholic.

*Which also helps answer the question of why the Director allowed the significant others to be kidnapped and the confession tapes to be made.

Protocol 2H: Historian updates are not to be discussed with anyone. Ever.

T.E.L.L.: The Time, Elevation, Latitude, and Longitude of what would have been the historical death of a Traveler’s host body.

One thought on “Travelers Season 3: Did Carly Provoke the Director into Intervening with Jeff?”