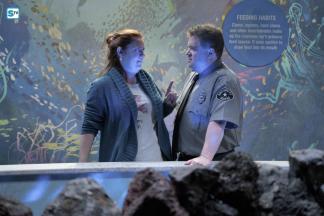 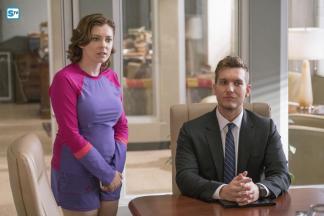 Crazy Ex-Girlfriend is renewed for a third season! The CW renewed almost all of its fall shows on Sunday (1/8), giving the showrunners ample time to plan for next season. (And avoid mistakes like letting Santino Fontana slip away.)

It’s a week later, and Paula and Rebecca have settled into coparenting. Paula understands the value of a wife now. She appreciates it so much, in fact, that she’d like several. (Duh, we all need a permanent 50s housewife and mom of our own.) Rebecca’s avoiding Josh, even though he’s made good on his promise to woo her. There’s a little shrine in the corner, filled with his offerings- stuffed animals, balloons, candy, and other romantic little gifts. Josh has been standing outside Paula’s house, waiting for Rebecca to change her mind, for 3 days.

Rebecca admits that she’s scared that Josh is still not committed to her. He’s had three girlfriends in three months. She can’t trust him any more. Josh promises things will be different this time. With a brief shovel talk from Paula, then her blessing, Paula and Josh head out into West Covina to start their romance for real. There’s a reprise of West Covina playing in the background, but this time we see the town closer to how it really is. The kids are spraying graffiti, the porn theater is hanging a new sign, and the ambulance-chasing lawyer is looking for new business. Everyone is happy, and happy for Rebecca and Josh. Rebecca thinks she’s going into the relationship with her eyes wide open this time.

END_OF_DOCUMENT_TOKEN_TO_BE_REPLACED 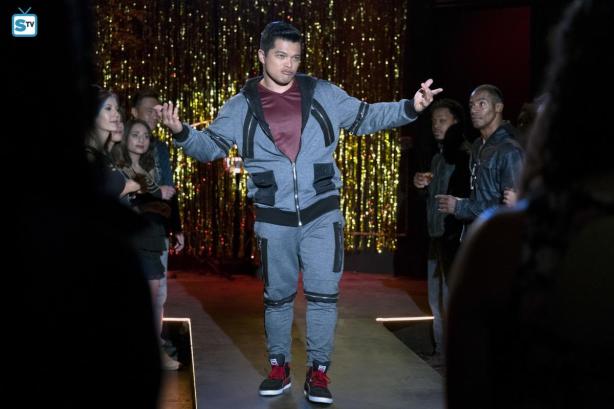 Paula and Rebecca finally make up this week, but Paula throws Scott out of the house, so her life is still in turmoil. Paula would rather end the marriage than look at her role in their issues. Suddenly the reasons she and Rebecca are so close become even more clear. Rebecca proves she’s a caring, nurturing friend to both Josh and Paula. Because she’s a good person.

The Proctor family is going through their morning routine. Scott packs the boys lunches, a hunk of salami, a couple of pieces of cheese, and some bread. Take a bite of each, and it’s a sandwich in your mouth. I’ve used this method, and it works, in a pinch. Paula’s kids aren’t convinced. Wait until they move out of the house.

Paula is maybe a little too grateful for Scott’s help in the kitchen, which brings out his guilt. He blurts out that he slept with Tanya. Paula thinks it’s a joke at first. He explains that it happened once, when they were drunk, by accident. He promises it will never happen again. Paula refuses to discuss the issue and throws him out of the house.

She takes out her anger on her coworkers instead of on Scott. It is really annoying when someone leaves the ice cube trays empty, though, I think we can all agree.

END_OF_DOCUMENT_TOKEN_TO_BE_REPLACED 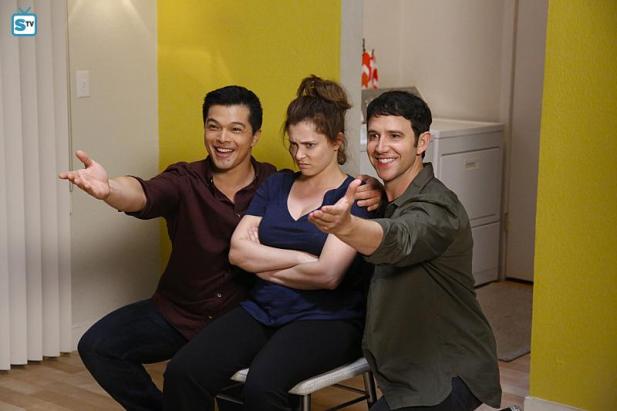 Sadly, Rebecca,  Josh’s friend is about to leave you alone for a long time, possibly forever. This is Santino Fontana’s last episode, since he only wanted a one year contract. While this is great news for Greg the character, it’s sad news for fans who enjoyed watching him every week. I’m going to believe that Greg, and Santino, will be back eventually. He’s too close to too many people in West Covina to leave forever, as Greg himself said. My shipper heart will keep hoping that Greg and Rebecca will get their happily ever after, even though I will try to stay open to other possibilities. But, if Glee can bring Jon Groff back for its last two episodes to give Jesse St James and Rachel Berry their HAE, Crazy Ex-Girlfriend can do the same for this pair, once they’ve both worked out all of their issues separately.

On to the actual recap…

We pick up where we left off last week, as Rebecca catches up with Greg at the airport. He’s about to fly off to start college at Emory. She begs him to stay, but he can’t. They’re terrible for each other, a shit show, in fact. He didn’t say goodbye to her because he loves her, and he wouldn’t have been able to bring himself to leave if he’d seen her. He gets on the escalator to go catch his flight. There goes the man of my dreams (in addition to my husband and my other 10 TV boyfriends and girlfriends, of course).

END_OF_DOCUMENT_TOKEN_TO_BE_REPLACED 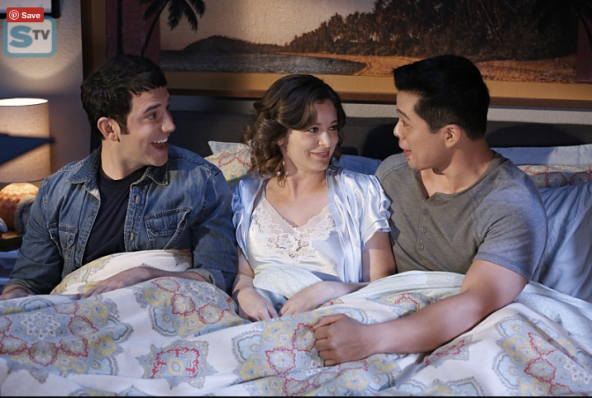 We start this episode with the season 2 theme song, to remind us that Rebecca is a girl who’s obsessively in love, and she’s not going to listen to what anyone else has to say about it. And everyone has something to say about it. The theme fades to Rebecca’s fantasy of a polyamorous relationship between her, Greg, and Josh, complete with pizza in bed and arm wrestling for sex. It’s as wholesome and adorable as the Brady Bunch.

END_OF_DOCUMENT_TOKEN_TO_BE_REPLACED 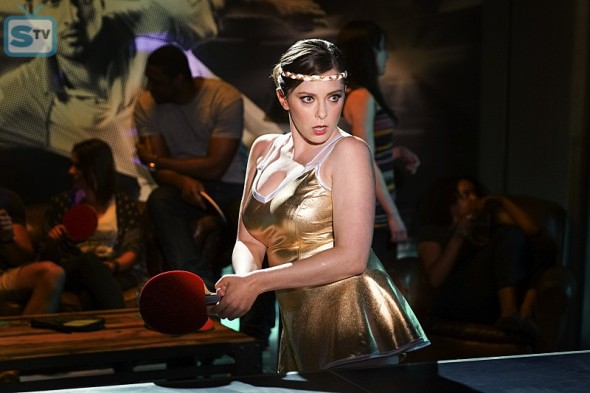 Lots of honesty mixed with disappointment amongst the characters this episode. Some of the truth-telling goes well, some makes things worse.

Greg goes to a biker AA meeting. Alcohol was Greg’s shield until 27 days ago. My Marvel Cinematic Universe-loving heart is going to take that as a Captain America reference.

What could possibly stop Greg from bringing the donuts?

Of course West Covina has a Ping Pong Cocktailaria. What small town doesn’t?

Josh repeats Rebecca’s made up ping pong title back to her just as fast as she makes it up. Impressive. Physical stuff is his comfort zone.

I love the purple shirt on Rebecca and the orange cardigan on Paula in first office scene. They look so good on each actress, and with each other. Are the characters coordinating outfits now?

Paula becomes a fairytale princess and sings Maybe This Dream after she asks Rebecca to write a reference for her law school application. We see her low self confidence, and more hints that she’s had tough times in her life that we don’t know about yet:

END_OF_DOCUMENT_TOKEN_TO_BE_REPLACED 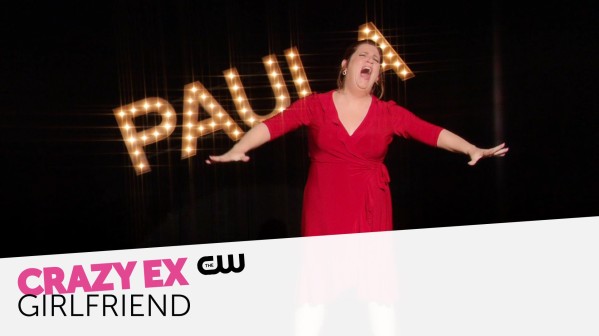 Paula, Paula, Paula. I love her so much, I know her so well. She’s one of those middle-aged women who followed the rules and did what they were supposed to do. They got married, had kids, sent them to school, worked at an ok job to help support the family, married a decent guy, and it was all fine. She didn’t have much in common with her kids, but she loved them. Her job wasn’t fulfilling, but they needed the money. She loved her husband, but life was too busy for them to actually connect much anymore. And as she reached middle age, she felt like life was passing her by, like she needed something more, just for her. Happens to us all right around 40. But she didn’t want to admit that to herself out loud yet, didn’t want to be selfish and upset the family order. Enter Rebecca Bunch, exciting young single woman, the potential daughter she never had, with an exciting life Paula could live vicariously through.

END_OF_DOCUMENT_TOKEN_TO_BE_REPLACED

This week, we all learn some lessons in relationship maintenance and proper pet care. Neither exes new girlfriends nor pets should be followed too closely with a car.

Mostly random observations and meta this time, because most of my week has been taken up with musical theater fun (Hedwig!). Next time, a review and analysis of the first half of season 2. I’ll try not to linger on Greg’s departure too long, or embed every song he sang.

Josh is really needy, desperate, and looking for love. He’s in awe of Anna, who just might be taking advantage of the fact that he thinks she’s out of his league. I still don’t trust Anna, even if she’s not a drug dealer. What does she need from Mexico? But she’s Brittany Snow, who I’m preprogrammed to want to keep around as long as possible, so this sets up mixed feelings about their relationship in my mind.

Frida Kahlo foam drawings. Coffee made from mixing individual beans. I think my son goes to that coffee shop. The metawitches drink more tea than coffee. We’ll compare chai blends with you anytime.

END_OF_DOCUMENT_TOKEN_TO_BE_REPLACED 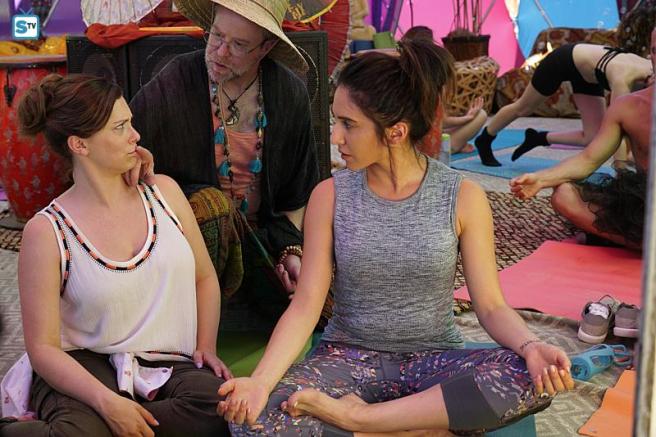 Sob, it’s the beginning of a new Gregless era. But Valencia’s back, and she was perfect even in the caveman days. This is my first stab at a recap/review type post. I’m just going to post some stream of consciousness comments about the episode, then a few more ideas I’ve thought out more at the end. We’ll see how it goes.

-Rebecca’s book is called Blood and Lice, a follow up and probable inspiration for the blood coven a few weeks ago.

-Heather doesn’t need a real job; de-Josh-toxing Rebecca is enough of a job.

-Paula gets mommed a little when Rebecca drops her off for the first day of school, but then Bex blows it by taking the extra juice box.

-Sunil actually wins the episode with the “mom farm upstate, where moms run around all day.” Bonus points if he sticks to it until his kids are adults.

–Roxanne Gay. We get it, Rachel, you want us to read her. On it already.

-Valencia looks great to me. She no longer looks like she’s using her appearance as armor to keep people at a distance.

-Hector and his mom started a dating advice podcast. Miss Douche has a real Twitter account. Could we please, please get a few of those podcasts?

-Josh likes organizing and sorting. An actual strength of his that he could use for a career that they’ve never shown us before.

-Josh thinks in thought bubbles and is worried he won’t measure up to expectations. Where is Father Brah when we need him?

-Bex is still focused on everything outside herself, rather than what’s inside (Waitress reference!): mmm, babaganouj, Josh has narcissistic personality disorder (really Bex, looked in a mirror?)

-Love the spaceship notes app. Why am I not surprised Paula has caper clothes in multiple colors and patterns? That’s right, skulk for YOU, and no one else!

-(Rebecca probably has caper clothes in colors and patterns that match Paula’s. 😥  All will be right again when they wear their outfits together on a caper that doesn’t involve Josh.)

-Valencia’s ballet is romantic and traditional. She’s idealized Josh and their relationship. Rebecca’s is childlike, raw, and visceral (like raw meat). Bex is projecting all of her anger onto Josh, even though she blames herself, since she casts herself as the dinosaur and Josh as a handsome prince. First she made Daddy leave, then she made Greg leave, and now she made Josh leave.

-Of course Val loses the weight in one weekend, without trying, as soon as she feels good about herself again. Her weight was just a little situational depression weight gain, not about her genetics, build, or slow metabolism. Bex and I will totally outlast her during the next famine.

-Brittany Snow! Is Josh’s break from girls already over? She’s a good reason to give up celibacy, but he also needs the personal growth. Tough call for a viewer!